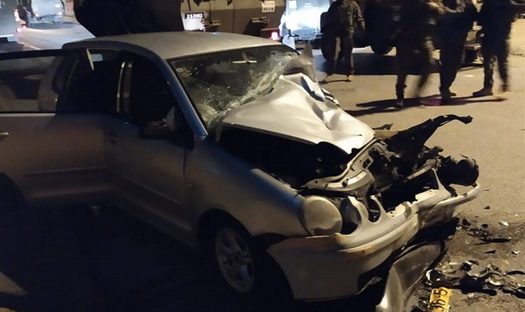 A terrorist who allegedly tried to carry out a ramming attack against undercover Border Police officers and hit an armored vehicle was neutralized and evacuated in serious condition to the hospital.

Border Police said that heavy damage was caused to the armored vehicle in which the fighters had been, but there were no casualties among our forces.

The fighters, who belong to the Border Police undercover unit, participated in a raid on the Al-Amari refugee camp near Ramallah last night and arrested wanted persons for belonging to a terrorist organization and involvement in terror activities.

At the end of the activity, a vehicle emerged, heading toward the force, apparently trying to run over the fighters. The vehicle crashed into the armored vehicle of the force. The fighters identified the terrorist making a suspicious move and holding a suspicious object in his hand that turned out to be a knife. As a result, they opened fire on the terrorist and neutralized him.

The terrorist, a resident of eastern Jerusalem in his 20s, was seriously wounded and taken to Shaare Zedek Hospital in Jerusalem. After the incident, serious disturbances of order developed, including the throwing of stones and Molotov cocktails at forces, who responded with riot dispersal measures.