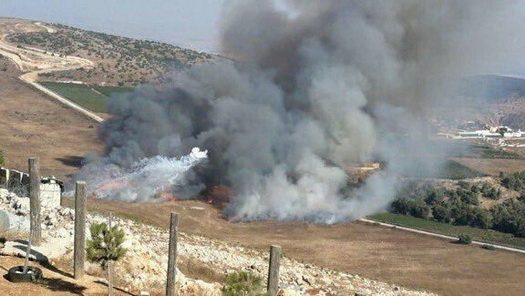 A projectile was fired from Lebanese territory into northern Israel, landing in the town of Avivim, near the Israel-Lebanese border, the IDF reported Sunday afternoon.

According to the preliminary IDF report, the projectile was an anti-tank missile, and was fired at an army vehicle near the border.

There are currently no reports of injuries.

The IDF has ordered that all towns four kilometers or less from the Lebanese border be placed on alert, instructing residents to remain indoors and ordering the opening of public bomb shelters.

Residents have not yet been instructed to evacuate to nearby bomb shelters, however, with the IDF adding that sirens will be sounded should evacuation become necessary.

The IDF has also ordered farmers to cease all activity near the Lebanese border, and has asked drivers to avoid travel on intercity roads in the four-kilometer border zone.

The missile was fired days after the Lebanese terrorist group Hezbollah vowed to attack Israel following an alleged Israeli attack on a facility in Beirut.

Update 9:55am: IDF spokesperson: Anti-tank missiles fired from Lebanon hit IDF military positions in northern Israel. We returned fire toward the source of the attack in southern Lebanon. We will continue to update as the situation develops.

Update 10:18am: Gag order placed by IDF on all details of injuries in latest attack.

Update 10:20am: A helicopter just landed in Rambam hospital with a few wounded soldiers.

Update 10:34am: Mortar falls about 300 feet from Kaan broadcaster 11, On the ridge near the settlement of Avivim. Kibbutz Biron, direct hit on a house.

Update 11:20am: IDF have stopped firing artillery shells into Lebanon.