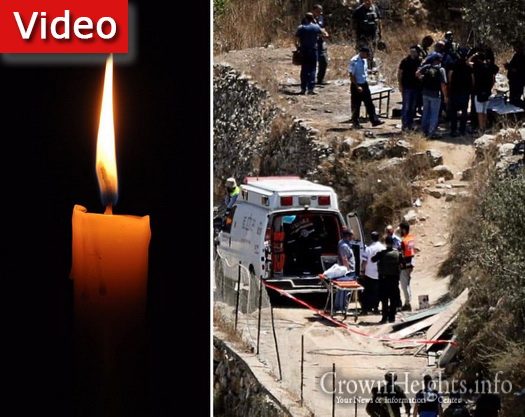 Magen David Adom (MDA) personnel were forced to declare the death of Rina Shnerb, A 17-year-old woman injured Friday in a terror attack near the Binyamin-region town of Dolev.

Three people were injured in the attack, which occurred at the Ein Bubin spring near Dolev when a terrorist planted an explosive device where Israeli hikers frequent.

She will be buried Friday afternoon in the new cemetery in her hometown of Lod.

Her father was moderately injured in the attack, while her 20-year-old brother suffered serious injuries. reports indicate that the father, attempting to save his son, used his tzitzis as a life saving tourniquet.

The terrorists who planted the explosive device escaped the scene and are being hunted by the IDF.

IDF forces are chasing a suspicious vehicle which escaped the scene and is believed to be the vehicle of the terrorists who threw the explosive device. The possibility that the explosive was a grenade thrown at people hiking in the spring is also being investigated.

Israeli Prime Minister and Defense Minister Binyamin Netanyahu is receiving constant updates regarding the intelligence and operational efforts to capture the terrorists who carried out the attack, and will hold security meetings with top Defense Ministry officials.

Ein Bubin is also called “Danny’s Spring,” after Danny Gonen, a Lod resident who was murdered there several years ago by a Palestinian Authority terrorist who had requested water.