« What It’s Like to Run the Chabad House on Tiny, Balmy Aruba
50 Winners to fly to Alma Ata for Chof Av » 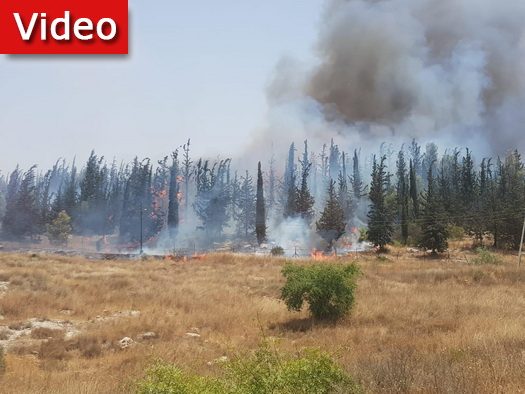 A number of major fires broke out across Israel Wednesday afternoon, forcing some evacuations and destroying a number of homes.

Five homes in the central Israeli town of Or Yehuda went up in flames after a fire broke out in the Ramat Pinhas neighborhood, forcing residents to evacuate. Firefighters have been deployed at multiple fronts around the Ramat Pinhas fire in a bid to prevent additional houses from being destroyed. Meanwhile, police have ordered residents out of the neighborhood.

In addition, residents from the town of Shavei Shomron in Samaria were also ordered to evacuate as a blaze raged out of control on the edge of town. Firefighters working to contain the blaze have been joined by police units who are overseeing the evacuation of residents.

Another fire was reported outside of the town of Aderet, near Beit Shemesh, west of Jerusalem. Ten firefighter teams have been deployed to bring the fire under control, with air units aiding the efforts.

Firefighters have also been deployed to the Check Post Interchange near Haifa to combat a major blaze, which forced road closures in the area.

A total of 15 firefighter teams have been dispatched to the Haifa area, and are operating on three fronts.

One apartment in the Haifa area was reportedly burned in a separate fire.

Authorities say no one was home at the time, and that the fire which damaged the apartment has been contained.

Other fires were reported outside of Modi’in, in central Israel; adjacent to Route 40, near the town of Nehalim, just south of Petah Tikva; near Kfar Aviv in the Ashdod area; near Kfar Yona, east of Netanya, and near Route 444 near Sdeh Hemed and Jaljulya.

« What It’s Like to Run the Chabad House on Tiny, Balmy Aruba
50 Winners to fly to Alma Ata for Chof Av »