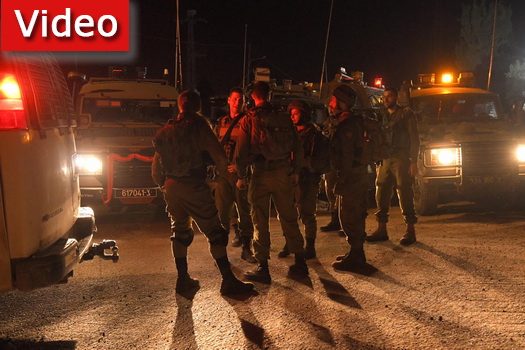 Overnight Saturday, following joint intelligence and operational activity of the IDF and the Israel Security Agency (Shin Bet), the terrorist suspected of running over five soldiers on Saturday night near the village of Hizma was arrested, the IDF Spokesperson’s Unit said.

An initial investigation into the incident revealed that it was a terrorist attack, during which the terrorist identified the soldiers who were standing on the roadside during an operational mission and ran them over.

As a result of the ramming attack, three fighters suffered moderate injuries, and two others were lightly injured. The soldiers were evacuated to hospital for medical treatment.

The terrorist and his father were captured at a checkpoint by IDF forces who were operating in the area following Shin Bet intelligence activity. The two were taken for questioning by security forces.

The IDF Spokesperson’s Unit stated that “the IDF will continue to act to maintain security in the area and will act to thwart terrorist attacks and capture terrorists.”

Earlier Saturday evening, an Arab terrorist attempted to run over a police officer in Samaria. No one was injured.

In that instance, as well, the suspect escaped the scene, leading Israel Police and IDF forces to begin searching for the vehicle.