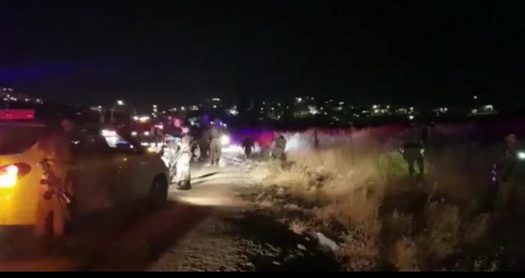 Five IDF soldiers were injured when a car rammed into them near Hizma, in northern Jerusalem.

Two of the soldiers were moderately injured, while the other three suffered light injuries. The victims were treated by Magen David Adom (MDA) and United Hatzalah paramedics, who transferred them to Jerusalem hospitals.

United Hatzalah volunteer EMT Ariel Ben David, who was one of the first responders at the scene, said: “I together with other first responders treated four young people, one woman and three men, who were injured in the incident. Following their initial treatment at the scene they were transported to Jerusalem hospitals for further treatment.”

MDA spokesman Zaki Heller said: “Magen David Adom paramedics are administering medical treatment and transferring four injured people to hospitals. The injured include a man in his thirties who is moderately injured and suffered injuries to his face and limbs, as well as a young woman of about 20 who suffered moderate injuries to her head and limbs.” Both are being transferred to Shaare Zedek Medical Center, he added, noting that “two additional people of about 20 who were lightly injured are being brought to Shaare Zedek and Hadassah’s Mount Scopus Hospital.”

Police and the IDF are searching for the terrorist, who escaped the scene, and the IDF is investigating whether the ramming was nationalistically motivated.

Earlier Saturday evening, an Arab terrorist attempted to run over a police officer in Samaria.

In that instance, as well, the suspect escaped the scene, leading Israel Police and IDF forces to begin searching for the vehicle. However, no one was injured.