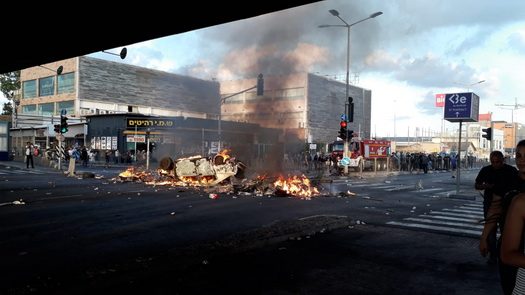 The nationwide violence by members of Israel’s Ethiopian Israeli community resulted in injuries and significant damage to police vehicles and more. On Wednesday morning, July 3, 2019, protest leaders announced they will resume later today, in areas around Israel, including Ben-Gurion International Airport and outside the home of Prime Minister Netanyahu in Caesarea. Wednesday’s protests are set to resume at 5:00PM.

The protests were sparked by the fatal weekend shooting of unarmed 18-year-old Solomon Takka by a policeman. Takka, who was unarmed, was shot by an off-duty policeman who explained he felt threatened when some threw rocks at him. The family of the deceased insist he was not involved in the rock-throwing.

Police announced that 136 persons were arrested and 111 were injured, most sustaining light injury. As seen in the footage from yesterday, protesters turned over and set police cars ablaze, and indiscriminately damaged property and attacked passersby. KAN11 News reports this morning there are also reports that live gunfire was directed at police. Police on Wednesday announce they will not permit a repeat of the violence seen on Tuesday.