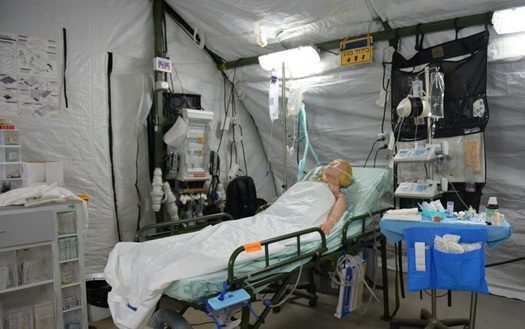 Prime Minister Binyamin Netanyahu has approved the measurement phase ahead of the construction of a huge 40-dunam international field hospital with 16 different departments near the Erez crossing, to be managed by an international medical team.

The Yediot Aharonot newspaper reports that the hospital will be funded by a private American organization and is meant to ensure a significant improvement and a response that is not currently available in the Gaza Strip to Palestinian Arab patients.

This past Thursday, after a week in which 100 fires were set off in the Gaza envelope as a result of incendiary balloons that had been fired from the Gaza Strip, negotiations between Hamas and Netanyahu began through intermediaries, at the end of which new understandings on a truce were reached.

Israel had demanded an end to the violence and gave Hamas 48 hours to fully implement the restraint on the ground. While incendiary balloons were still fired on Friday, and the weekly violent riots on the border took place as usual, the mediators’ expectation is that as of Sunday, there will be total quiet on the Gaza border.

According to the Yediot Aharonot report, if the quiet on the border is maintained in the coming days, the arrangement will move to its next stage, which will include significant projects. The continuation of the lull will also lead to a dialogue on the issue of Israeli POWs and MIAs in Gaza, with the goal of including it as part of the second stage of the arrangement.