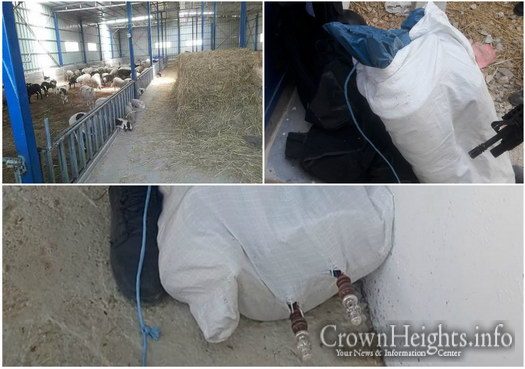 Israeli security forces recently recovered Torah scrolls stolen from a synagogue in central Israel and hidden in a barn inside a Palestinian Authority village.

IDF forces, along with Israel Police and Border Police officers, discovered four Torah scrolls in a barn housing sheep in the Palestinian Authority village of Aqraba, southwest of Shechem (Nablus) in Samaria.

The four Torah scrolls had been stolen from a synagogue in the city of Bnei Brak.

During the operation in Aqraba, five Arab suspects were arrested for the theft of the scrolls.

In addition to the scrolls, Israeli security forces also uncovered a hunting rifle, ammunition, and fireworks.

The Torah scrolls were removed from the barn, and will be returned to the synagogue in question at the end of the police investigation.

The scrolls, worth hundreds of thousands of shekels, were stolen during a break-in at the Orot Hatorah synagogue on Rabbi Akiva Street in Bnei Brak last Tuesday.

Following a preliminary investigation, Israeli police managed to determine the location of the stolen Torah scrolls, leading to the arrest operation.

The five suspects, all men in their 20s, have been identified as residents of Aqraba, Shechem [Nablus], and eastern Jerusalem.