« JEM: From A Different Angle
Here’s My Story: The Art of Saying I Don’t Know » 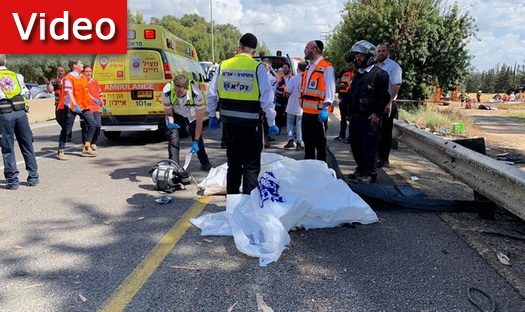 Four people, about 40-years-old, were killed today in a car accident in which a minibus collided with a security fence on Route 443, near the entrance to Modi’in.

Magen David Adom paramedics arrived at the site and began administering initial medical treatment to 14 casualties, including four who were initially critically injured but shortly afterwards whose death was determined.

Police reported Highway 443 blocked to traffic in both directions from Gamzu Junction to Adam Junction following the accident.

“This is a shocking accident,” MDA emergency medic MDA Daniel Dubinki said. “As I passed, I noticed a van that had lost control, crashed into the separation fence and continued dozens of meters along the fence. About 13 passengers were in the vehicle. I called in massive reinforcements and started a preliminary screening of casualties.

“Two men were trapped in the vehicle in their 40s and outside the vehicle were two other men, also in their 40s. The four of them were unconscious and suffered severe systemic damage. Their situation was dire and in a short time our paramedics arrived at the site and had to declare their death. Another nine were fully conscious, one suffering stomach and head injuries, and his condition was moderate, and the rest were bruised, and their condition was defined as light.”

« JEM: From A Different Angle
Here’s My Story: The Art of Saying I Don’t Know »