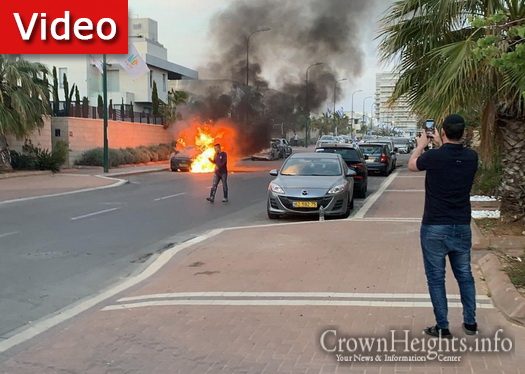 A gerrer Chossid was critically injured Sunday evening after nearly three dozen rockets were fired at southern Israel from the Hamas-ruled Gaza Strip. He later died in the hospital from his wounds.

A residential unit in the coastal city of Ashdod was struck by a rocket, leaving one person critically injured Sunday evening. The victim was injured by shrapnel from the exploding projectile.

MDA and United Hatzalah emergency first responders treated the victim at the scene then evacuated him to Assuta Hospital in Beer Sheva for further treatment.

According to a United Hatzalah spokesman, the victim is a 35-year-old man who suffered “full system injury” in the attack, leaving him unconscious.

United Hatzalah first responder Moshe Weizman reported from the scene that he “together with other volunteers from the organization treated a man who was suffering a full system injury prior to his being transported in an intensive care ambulance to the hospital for further care. At the time of transport, he was unconscious.”

During the latest wave of rocket attacks, a home in the town of Sderot was also hit by a rocket. No injuries were reported in the attack, however.

Four people have been killed in Israel by rocket and missile fire from the Gaza Strip since Saturday.

On Saturday, 58-year-old Ashkelon resident Moshe Agadi was killed when a rocket landed in a residential area. On Sunday, two people were killed when a rocket struck a factory in Ashkelon. A man in his early 60s was killed later on Sunday after a Kornet anti-tank missile was fired from the Gaza Strip at his car in southern Israel.

A total of 13 people have been killed in the Gaza Strip, six of whom have been identified as members of either the Hamas or Islamic Jihad terrorist organizations.