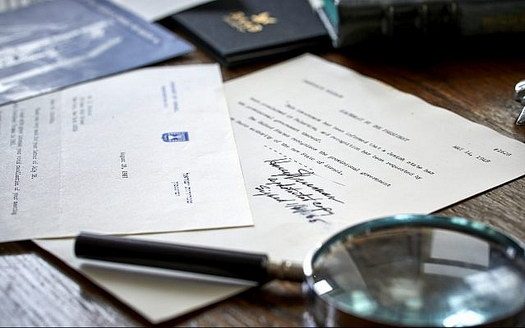 by Ben Zehavi – Times of Israel

For an estimated $300,000, somebody can now own a piece of American and Israeli history. The only known copy of the press release signed by president Harry Truman in which the US recognized Israel is being put up for sale by the Raab Collection, a Philadelphia-based company that buys and sells historic documents.

“I’ve never carried anything in recent history like this,” Nathan Raab, a principal of the company, told The Times of Israel on Tuesday. “Anything related to the founding of Israel is very uncommon and extremely desirable among collectors. I’ve seen letters of Churchill that reference the founding of Israel and they tend to sell very high. But I’ve never seen a document like this – and I probably never will again.”

To be clear, the press release for sale is not the original document from May 14, 1948, which Truman issued just hours after the Provisional Government of Israel declared a Jewish state. That artifact is in the Harry Truman Presidential Library in Independence, Missouri.

But the original release doesn’t bear Truman’s signature, as the president signed only an earlier draft, not the final statement.

Fast forward 16 years to the 1964-65 New York World’s Fair. Zecharia Sitchin, an author, Jewish activist, and chairman of the American-Israel Pavilion of the fair, had an idea. Realizing that the only instrument of recognition that existed was an unsigned White House press statement from 1948, he asked Truman for a signed copy. The former president agreed, instructed that a photocopy be made, and signed it for Sitchin to display at the World’s Fair.

Since then, the document has remained in the hands of the Sitchin family and has been displayed for the public three more times: during the 1986 Statue of Liberty centennial celebration in New York City; the 1988 celebration of Israel’s 40th anniversary at the Israeli Embassy in Washington, DC; and the 1988 Zionist Organization of America (ZOA) convention in Jerusalem on the group’s 90th anniversary.