« Minding the Mission: Jewish Education
Picture of the Day » 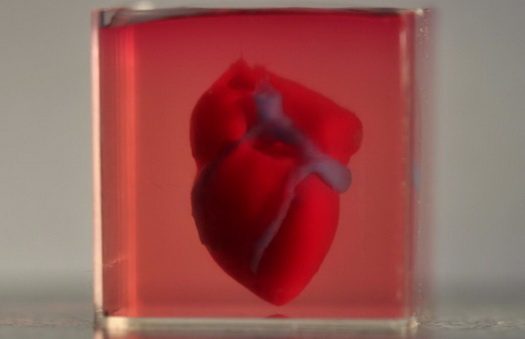 In a potentially a paradigm-shifting breakthrough, researchers at Tel Aviv University have succeeded in creating an artificial heart using a 3-D printer.

According to Hebrew news site Mako, the experiment was the first of its kind to work.

The researchers took fatty tissue from a patient, then separated the fatty tissue from extracellular material. They used genetic engineering techniques to turn the fat cells into stem cells. The stem cells were used to grow heart muscle and blood vessels.

Afterwards, the extracellular material was used as “ink” for the 3-D printer, which then printed the organ according to a computer program using MRI and CT imaging of a human heart as a guide.

The resulting heart is made up of extremely “young” cells, and researchers are now working on a method to “grow” a mature heart. They hope to begin transplanting such hearts into animal subjects by next year.

Professor Tal Dvir, whose department supervised the project, said, “Since 3-D printing technology was developed, researchers around the world have been trying to use it to print, among other things, tissue and organs for transplant. We developed a new technology that provided an answer to a large part of the difficulties that have arisen along the way.”

“The method we developed allows for printing a heart of any desired size,” he continued, “and because the heart is printed from the patient’s own tissue, the body does not reject it.”

“Furthermore, the system allows for the printing of any organ required for transplant,” he added, noting this would eliminate the necessity of organ donation. “When a patient needs a transplant, you take tissue from his body and use it to print the organ according to the suitable size and characteristics, which will be planted in his body.”

« Minding the Mission: Jewish Education
Picture of the Day »