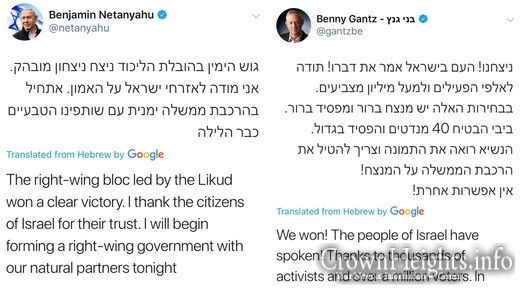 According to Israel’s Channel 13, Netanyahu’s Likud and Blue and White will each receive 36 seats in the next Knesset. Center-left party Labor, the religious Shas party, Arab party Hadash-Ta’al, and Haredi party Yahadut HaTorah will all receive seven seats respectively. The far-right Union of Right-Wing Parties, centrist party Kulanu, left-wing party Meretz, and center-right party Yisrael Beiteinu will each receive four seats. The far-right libertarian party Zehut, Arab party Ra’am-Balad, and centrist party Gesher will not cross the electoral threshold for inclusion in the Knesset.

According to Channel 13, this result would give 66 seats to the center-right bloc and 54 to the center-left bloc, making it easier for Netanyahu to potentially form a government.

Israel’s Channel 12 showed a more lopsided result, with 37 mandates for Blue and White against 33 for Likud. Yahadut HaTorah would receive seven seats. Hadash-Ta’al and Ra’am-Balad would each receive six, as would Shas. Meretz, Yisrael Beiteinu, and the Union of Right-Wing Parties will receive five, and Kulanu will receive four.

This result indicates an absolute tie between the two main Knesset blocs, 60 for the center-left and 60 for the center-right. This likely means that any further variation in the exit polls could have an outsize impact on the projections.

Israel’s public broadcaster Kan also showed a tie between the two main parties, with Likud and Blue and White at 36 seats apiece. Labor, Yahadut HaTorah, Shas, and Ra’am-Balad will receive seven. Meretz, the Union of Right-Wing Parties, Kulanu, and Yisrael Beiteinu would receive four seats. In a surprise, this poll shows that the New Right party led by education minister Naftali Bennett and justice minister Ayelet Shaked would receive four seats, whereas the other surveys showed it failing to reach the Knesset.

If there are any surprises, it’s the poor showings by the New Right and the Zehut party. The New Right was seen as a potentially strong coalition partner for Netanyahu and was running at several seats in all previous polls. Even more striking was the collapse of the Zehut party, whose right-libertarian ideology had aroused great public interest and was thought to be a likely kingmaker in upcoming coalition negotiations.