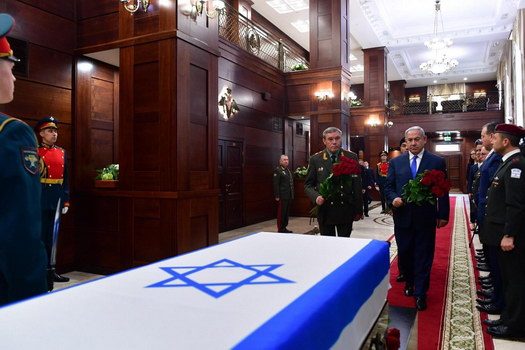 Prime Minister Benjamin Netanyahu attended an official ceremony of the Russian Ministry of Defense on Thursday afternoon, during which the remaining items belonging to the late Zachary Baumel were handed over to the prime minister.

Among the objects delivered were Baumel’s tank suit and military boots. The ceremony was attended by Chief of Staff of the Russian Army Valery Gerasimov.

Prime Minister Netanyahu thanked the Russian defense establishment. “Thank you very much, sir, thank you again to President Putin and the Defense Ministry of Russia. This exciting day and ceremony are another expression of the special connection between the Russian people and the Jewish people.”

“We never forget the enormous sacrifice of the Russian people and the Red Army to save humanity and save the Jewish people from the Nazi monster. Hundreds of thousands of Jews fought valiantly in the service of the Red Army and many of them we know in Israel are still bearing medals, and many others helped establish the Israel Defense Forces,” Netanyahu added.

“It is therefore heartwarming to see the partnership of values, respect for soldiers, brotherhood of soldiers, comradery of soldiers, and the important principle that no one is left behind,” added the prime minister.

During the ceremony, a mourning song was played by the Russian defense ministry band. At the end of the ceremony an Israeli flag placed on a coffin bearing the items was folded by the Guard of Honor and given to the prime minister.