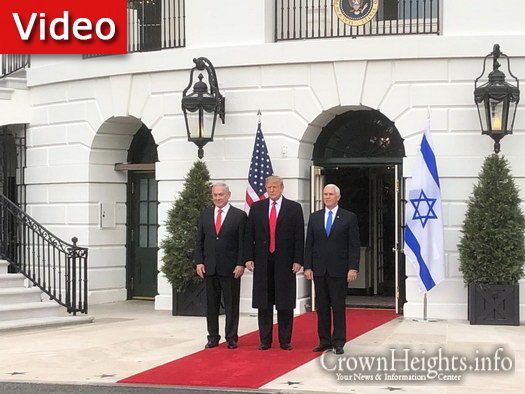 As he sat down to sign the order, Trump said that the act was “a long time in the making. It should have taken place many decades ago.”

Trump said that the US-Israel alliance “has never been stronger.”

“At this moment the American embassy stands proudly in Jerusalem, the capital the Jewish have established. They wanted the embassy for many, many years, for many decades, and frankly, through many presidents. And we got it done,” Trump said.

“We will confront the poison of anti-Semitism through our words, and maybe even more importantly, our actions. In the last century, humanity witnessed the horrific consequences of anti-Semitism and a world without a Jewish homeland.

“In the wake of those unthinkable horrors, the Jewish people built a mighty nation in the holy land, something very powerful, something very special and important … There can be no better example of greatness than what Israel has done starting from such a small speck of sand.

“Israel is an inspiration, a trusted ally, and a cherished friend. The United States will always stand by its side,” the president concluded.

Prime Minister Netanyahu thanked the president for recognizing the Golan Heights as part of Israel.

“You have shown consistently, incredible support for Israel, for our right to self-defense. When we exercise that self-defense you have never flinched. You have always been there, including today, and I thank you,” Netanyahu told President Trump.

“Over the years, Israel has been blessed to have many friends who sat in the oval office. But Israel has never had a better friend than you. You showed this time and again. You showed this when you withdrew from the disastrous nuclear deal with Iran … You said it you did it.

“You showed it again when you restored sanctions against a genocidal regime that seeks to destroy the one and only Jewish State … You said it, and you did it.

“You showed that when you recognized Jerusalem as Israel’s capital and moved the American embassy there … You said it. You did it.

“And you have shown it once again today, Mr. President, with your official proclamation recognizing Israel’s sovereignty on the Golan Heights,” Netanyahu said.

Putting Trump’s declarations on Jerusalem and the Golan Heights in historical context, Netanyahu said: “In the long sweep of Jewish history there have been a handful of proclamations by non-Jewish leaders on behalf of our people in our land: Cyrus the Great, the great Persian King, Lord Balfour, President Harry S. Truman, and President Donald J. Trump.”