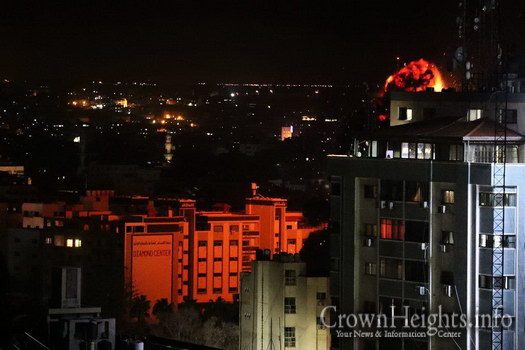 The IDF confirmed Monday afternoon that the military response to the firing of a rocket at central Israel by terrorists in the Gaza Strip had begun.

The IDF Spokesperson issued a statement stating that the IDF had begun to attack targets belonging to the Hamas terrorist organization throughout the Gaza Strip.

The action was after a rocket was fired at Moshav Mishmeret in the Sharon region, hit a house and wounded seven civilians.

Arab media reported that the Israeli Air Force had attacked several locations in the Gaza Strip.

Earlier, the IDF announced that in view of the situation assessment and as part of upgraded preparedness measures, the Gaza Division decided to block areas and roads adjacent to the Gaza security fence. It was also decided to stop agricultural work in areas adjacent to the fence.

Additionally, all Gaza area authority departments were canceled this afternoon. Meanwhile, incendiary balloons continue to be launched from the Gaza Strip. At noon such balloons were located in Kiryat Gat near the railroad tracks.

Eshkol Regional Council sent a message to its residents cancelling all afternoon activities for area children. “Dear parents, in view of the security tensions, it was decided to cancel department activities this afternoon, which will end at 15:45. All activity beyond this hour is canceled for today.”

UN Special Envoy to the Middle East Nikolai Mladanov referred to the morning rocket fire from Gaza into Israel: “The launch that hit a house north of Tel Aviv and wounded seven people is entirely unacceptable. This is a very serious incident. The UN is working with Egypt all the time and with all sides but the situation remains very tense.”

The IDF announced it would deploy reserves to Iron Dome batteries and Home Front Command, and transfer an armored brigade and infantry brigade to Gaza.