« Annual Dinner to Benefit Central Gmach of the FSU in Moscow
JEM: Too Early to Start Purim Preparations? » 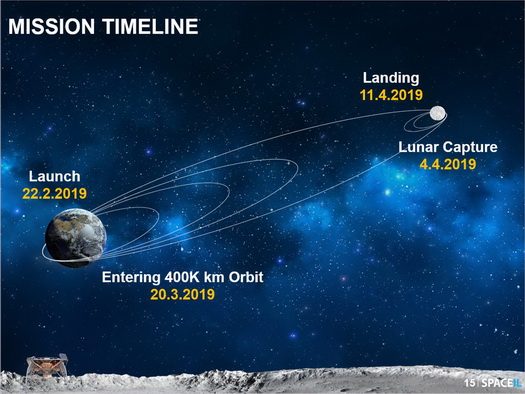 Israel‘s first spacecraft designed to land on the moon is set to blastoff from Florida on Thursday in the first privately-funded lunar mission, as the Jewish state seeks to become only the fourth nation to reach the surface of Earth’s natural satellite.

The unmanned robotic explorer named Beresheet — Hebrew for the word “genesis” — was due for liftoff from Cape Canaveral Air Force Station at 8:45 p.m. EST atop a Falcon 9 rocket launched by the California-based entrepreneur Elon Musk’s SpaceX company.

If the launch is successful, Beresheet is due to arrive on the near side of the moon in April following a two-month journey through 4 million miles (6.5 million kilometers) of space.

The United States, the former Soviet Union and China are the only three nations to date to have achieved controlled “soft” landings of spacecraft on the lunar surface.

The US Apollo program tallied six manned missions to the moon — the only ones yet achieved — between 1969 and 1972, with about a dozen more unmanned landings combined by the United States and Soviets. China made history in January with its Chang’e 4, the first to touch down on the dark side of the moon.

“This is the beginning of Israel‘s story in deep space … whether this succeeds or fails,” SpaceIL president and billionaire high-tech developer Morris Kahn, who invested $44 million of his own money into the Beresheet project, told Reuters in an interview.

The Falcon 9 rocket will thrust Beresheet into a “long and complex” Earth orbit where it will spend roughly five weeks gradually widening its orbit until close enough to enter the moon’s gravitational field. From there, the spacecraft will execute a series of maneuvers to reach its destination between the landing sites of Apollo 15 and 17 by mid-April.

During a mission slated to last just two to three days on the moon, Beresheet will use on-board instruments to photograph the landing site, measure the moon’s magnetic field and send all the data back to SpaceIL’s Israel-based ground station Yehud, via NASA’s Deep Space Network, SpaceIL vice president Yigal Harel told Reuters.

If successful, Beresheet will end up as the prototype for a series of future moon landing missions jointly planned by IAI and Germany’s OHB System on behalf of the European Space Agency.

SpaceIL has no plans for future explorations of its own beyond Beresheet and “will not continue after this mission,” Harel said.

« Annual Dinner to Benefit Central Gmach of the FSU in Moscow
JEM: Too Early to Start Purim Preparations? »