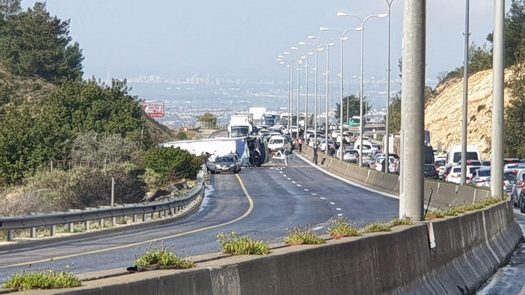 The victims killed in a massive traffic accident outside of Jerusalem Sunday morning have been identified as residents of the haredi city of Modiin Illit in southwestern Samaria.

Authorities say the victims killed in the accident were sisters.

The accident occurred at approximately 9:15 a.m. Sunday morning on Route 443.

A bus from the Kavim company’s 304 line which links Modiin Illit to Jerusalem, was travelling down Route 443 from Modiin Illit towards the capital when the accident occurred, a spokesperson for Kavim said in a statement Sunday afternoon.

“Sadly, this morning at 9:15 a.m., a 304-line bus of Kavim Illit which was travelling from Modiin Illit towards Jerusalem on Route 443 was involved in a serious traffic accident near Beit Horon.”

“Representatives of the company are cooperating fully with rescue workers, the police, MDA, and the municipality of Modiin Illit. The company is in the middle of a preliminary investigation into the incident, and the findings will be forwarded to the relevant authorities.”

In addition to the two women killed in the accident, 41 other victims were injured. Two of the injured are said to be in serious condition, with another five in moderate condition, and the remaining 34 victims in light condition.

The victims were treated on the scene and at least 33 people were evacuated via ambulance to hospitals in Jerusalem, Tel Aviv, and Tzrifin. One victim was evacuated to Hadassah Ein Kerem, 14 to Shaare Zedek, 11 to Assaf Harofe (also known as Yitzhak Shamir Medical Center), six to Hadassah Mount Scopus, and one to Ichilov.

Police reported earlier on Sunday that the accident took place following a smaller accident on Route 443.

A passenger van in the opposite lane, heading toward Jerusalem, then perceived the accident and stopped on the left side of the lane, with the intent of providing aid at the scene of the accident.

At this point, a bus following the van hit the van and flipped over on its side, skidding into a ditch and hitting the safety rail.