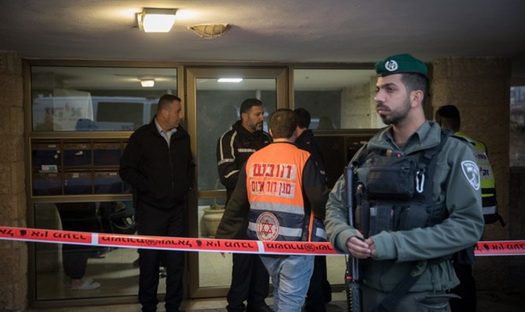 Investigators probing the deaths of two elderly Jerusalem residents have made significant progress Tuesday, though details of the case remain barred from publication.

Police ramped up the murder investigation Monday, a day after 71-year-old Yehuda Kaduri and his wife, 68-year-old Tamar Kaduri, were found dead in their apartment in the Armon Hanatziv (East Talpiot) neighborhood of Jerusalem.

Authorities discovered the couple dead on Sunday, with signs of violence on the bodies which police said made it clear the two had been murdered.

The discovery was made when concerned relatives of the couple contacted police. Family members noted that since Thursday no one had been able to reach the Kaduris.

Police suspect that the couple were slain on Thursday – a day after a stabbing attack at a nearby bus stop on the same street – Mordechai Elkahi Street.

The timing and location of the double homicide has raised concerns that the killer may be the same man responsible for the stabbing attack.

The perpetrator of the bus stop stabbing attack was described by the victim as having an “Arabic appearance”, leading to concerns the stabbing was an act of terrorism.

While police have refused to comment on recent discoveries in the case, Rachel Levy, the sister of Yehuda Kaduri, said that the investigation was leaning towards the theory that the murders were terrorism.

“We know that everything is under investigation,” Levy told Yediot Ahronot Tuesday. “The case is being investigated as [potentially either] a criminal matter or a nationalistic one, leaning towards being a nationalistic case.”

“Armon Hanatziv is known as being a violent place, one of the neighborhoods of Jerusalem that has suffered the most from terrorism. Just a day before [the slayings] a girl was stabbed with a knife on the same street, some 200 yards from the [victims’] home. We believe that it was a terror attack.”