« Bais Rivka High School Goes on a Shabbaton to the Raleigh
Caught on Camera: Porch Pirate » 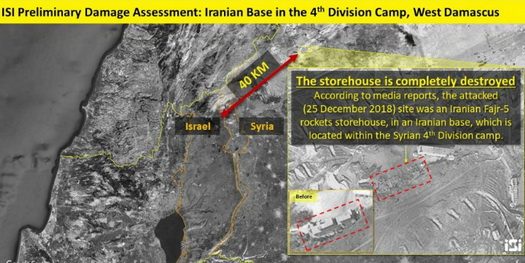 The photos — taken by ImageSat International (ISI) — reveal what is described as a “completely destroyed” Iranian Fajr-5 rocket storage facility, located on Syrian military base west of Damascus.

Russia on Wednesday accused Israel of committing a “gross violation” of Syria’s sovereignty.

Speaking at a graduation ceremony for new air force pilots on Wednesday, Israeli Prime Minister Benjamin Netanyahu said, “We are not prepared to accept the Iranian military entrenchment in Syria which is directed against us. We will act against it vigorously and continuously, including during the current period.”

The Associated Press reported later on Wednesday that an Israeli security official had confirmed the IDF’s responsibility for the previous night’s strikes in Syria, saying a “series of targets” linked to Iranian arms transfers to Hezbollah had been hit.

In recent years, Israel has conducted numerous strikes in Syria to prevent the delivery of advanced Iranian weaponry to Hezbollah.

#BREAKING: the #attacked (25 December 2018) site in the #Syrian 4th division camp is completely #destroyed. According to media reports, it was an Iranian #Fajr-5 rockets storehouse, located in an #Iranian base, only 40 km from the border with #Israel. pic.twitter.com/iPWpJDxYjn

« Bais Rivka High School Goes on a Shabbaton to the Raleigh
Caught on Camera: Porch Pirate »