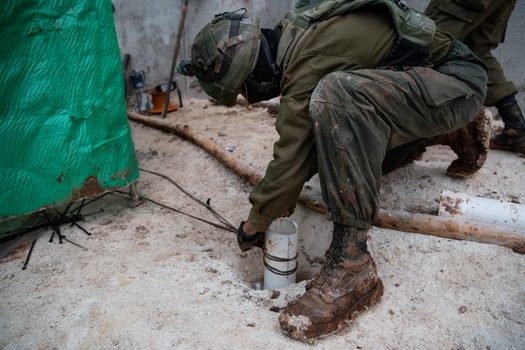 IDF Soldier working to locate tunnels on the Lebanese border.

Israel urged the United Nations on Wednesday to take forceful action against Hezbollah following the recent discovery of four tunnels dug under its northern border with Lebanon.

At a meeting of the UN Security Council in New York, Israeli Ambassador Danny Danon said, “Let me be abundantly clear — Hezbollah’s activities are a flagrant and unacceptable violation of Security Council Resolution 1701 and the ‘Blue Line.’ They also violate the UN Charter and international law.”

Israel, Danon stated, was calling on UNIFIL — the international peacekeeping force in southern Lebanon – to “carry out its full mandate under Security Council Resolution 2433 and maintain regional security.”

“The world has expectations of UNIFIL that it must meet,” he had.

Danon also demanded that the Security Council blacklist Hezbollah as a terrorist organization, “just as it designated ISIL, Al-Qaeda and the Taliban.”

“The international community must condemn Hezbollah in the strongest terms and stand by Israel’s self-defensive measures,” he went on to say. “It is the expectation that Lebanon will eliminate these terror tunnels and prevent the building of future attack tunnels that threaten Israel.”

Danon spoke after his Lebanese counterpart, Amal Mudallali, condemned Israel in her own remarks to the council. Addressing Mudallali directly, Danon said she represented “a government that allows Iran and its proxies to turn Lebanon into a launching pad for terror.”

“The Lebanese government is endangering its own people by simply doing nothing,” he charged. “How have you allowed Hezbollah to build an underground city of tunnels that places the citizens of Lebanon in constant danger? There are no expectations from a terrorist organization to act appropriately, but where was your government? What has your government done to prevent Hezbollah from triggering a regional war? Hezbollah is hijacking the entire State of Lebanon to attack Israel, and the government of Lebanon has surrendered. By closing its eyes as its people live inside a ticking time bomb of terror tunnels, missiles and rockets, the government of Lebanon has failed its people.”

“If Hezbollah will have the arrogance to attack Israel, we will bury it in the rubble of Lebanon,” Danon warned. “We will never let terror win.”

Addressing the same gathering, Rodney Hunter — the political coordinator of the US Mission to the UN — said, “The United States strongly supports Israel’s efforts to defend its sovereignty and unconditionally affirms Israel’s right to self-defense. We call on President Michel Aoun and the Lebanese government to undertake all possible efforts to halt Hezbollah’s illicit tunneling into Israel and to ensure that there is no escalation of tensions or violence. This includes President Aoun directing the Lebanese Armed Forces to act promptly to investigate the suspected starting points of the tunnels.”

Hunter also emphasized that UNIFIL must “take all necessary measures to ensure that its area of operations is not used for hostile activities and to ensure that these tunnels do not pose a threat to peace and security.” Toward that end, he noted, UNIFIL needed to be “provided all possible relevant information regarding, and full access to, the suspected tunnel locations in southern Lebanon.”

Furthermore, Hunter added, “we also call on Iran and its agents to stop their aggressive behavior and provocation in the region, which pose an unacceptable threat to Israeli and regional security.”

In comments to reporters in Israel ahead of Wednesday’s Security Council meeting, Prime Minister Benjamin Netanyahu said, “Hezbollah is a tool of Iran. Both are committed to our destruction. They use criminal methods, illegal methods, war criminal methods, commit war crimes against our civilians, and they commit war crimes against Lebanon’s civilians. The Lebanese government, which should be the first to challenge this and to protest this, is doing nothing at best and colluding at worst. That’s the truth. That has to be exposed, condemned and acted against. And there is no way to do that with a blanket of silence.”