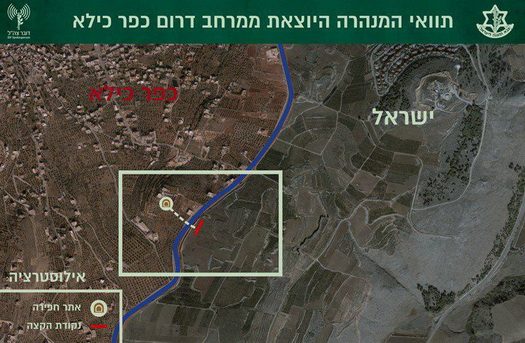 According to an army spokesperson, the tunnel was discovered Tuesday morning by IDF forces operating along the Israeli-Lebanese border.

The tunnel, apparently built by Hezbollah terrorists, originates in the southern portion of the Lebanese town of Kafr Kela. The tunnel crosses over into Israeli territory, however, and is believed to have been dug for use in an upcoming terror attack on Israeli targets. 80+ft underground, the tunnel is 6ft wide, 6ft tall,  and extends130ft into Israeli territory

“A short while ago, IDF troops located a cross-border attack tunnel in the southern area of Kafr Kela. At this time, the IDF is carrying out an operational and engineering process to neutralize the tunnel,” an army spokesperson said Tuesday.

“The tunnel was located as a part of Operation ‘Northern Shield’ to expose and neutralize cross-border attack tunnels dug by Hezbollah from Lebanon into Israel.”

Despite the tunnel’s discovery, the IDF said there was no immediate threat to any towns in northern Israel.

“The tunnel infiltrated into Israeli territory and was intended to harm Israeli civilians. The tunnel did not pose an immediate threat to Israeli communities in the surrounding area.”

Earlier on Tuesday, the IDF announced that it had launched an operation along the northern border to locate and neutralize cross-border ‘terror tunnels’ from southern Lebanon built by the Hezbollah terror organization.

“The Hezbollah terror organization, which is responsible for digging the cross-border attack tunnels, continues its activity that is supported and funded by Iran, to establish its terror infrastructure against Israeli civilians,” an IDF spokesperson said.