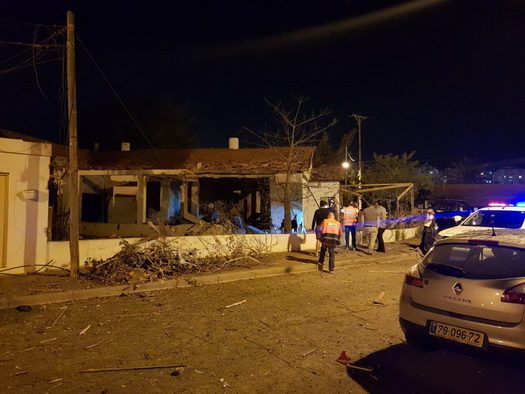 A rocket causes damage in Ashkelon earlier on in the night.

A 40-year-old man was killed and a 40-year-old woman was critically injured on Monday night when a rocket fired from Gaza hit a residential building in Ashkelon.

In addition, a 40-year-old man suffered moderate injuries and nine others were lightly injured. Magen David Adom paramedics evacuated the injured to the Barzilai Hospital.

MDA paramedic Eyal Chen said, “After the rocket landed, we searched the area, the fire department broke into one apartment which was locked and there we found a 60-year-old woman, unconscious with blast wounds and multiple injuries. We provided medical treatment including ventilation and evacuated her to Barzilai Medical Center in critical but stable condition.”

“The MDA EMTs and paramedics who were with us at the scene provided medical treatment to an additional 6 injured from shrapnel and smoke inhalation due to a fire which broke out in the courtyard of the building and to an additional 3 suffering from stress symptoms. All the injured were evacuated to Barzilai Medical Center in Ashkelon,” he added.

In one incident, an IDF soldier was seriously injured by an anti-tank missile that was fired by terrorists at a bus in the Sha’ar Hanegev Regional Council.

Following the escalation, the Home Front Command announced that schools will be closed on Tuesday in the Central Negev, Lachish and Gaza envelope. Classes were also canceled in Be’er Sheva and Ashdod.

In the wake of the security situation, Interior Minister Aryeh Deri decided to postpone the runoff for the head of the Hof Ashkelon Regional Council, which was scheduled to take place on Tuesday.