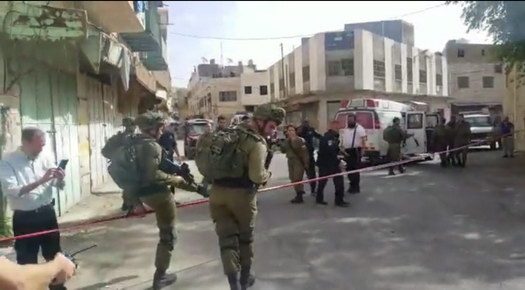 An Israeli soldier was stabbed by an Arab terrorist in the city of Hevron Monday morning.

The attack occurred between the Avraham Avinu neighborhood and the Tomb of the Patriarchs in Hevron, when an Arab terrorist carrying a pair of scissors lunged at a group of IDF soldiers, stabbing one of them.

Israeli security forces opened fire on the terrorist, killing him.

The soldier wounded in the attack is said to be in light condition, and was evacuated to the hospital for treatment. He is reportedly conscious and able to stand on his feet.

Yossi Dayan, head of the local ZAKA response team, describe the scene of the attack.

“When I arrived at the scene, I saw the terrorist lying in the middle of the road and next to him a sharp object after he tried to stab civilians and was neutralized by the soldiers. A young man who was lightly injured by the terrorist was treated at the scene and then taken to the hospital. There are no further casualties. ZAKA volunteers from the Shai region are taking care of the scene.”

An IDF spokesperson said the army was examining the circumstances of the incident.

“An assailant attempted to stab a soldier adjacent to the Cave of the Patriarchs, lightly injuring him,” the IDF said in a statement. “The soldier and other forces at the scene, responded with live fire.”