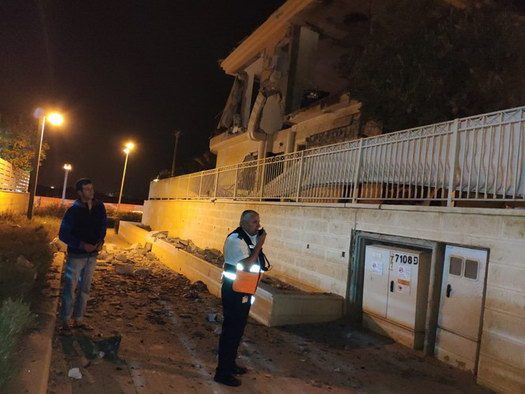 A rocket fired from the Gaza Strip overnight Tuesday exploded near a home in the southern Israeli city of Be’er Sheva.

Magen David Adom paramedics gave medical treatment to a woman about 50 years of age and a 40-year-old man who suffered light injuries while running to a protected area. In addition, a 20-year-old woman who suffered from shock was evacuated to the Soroka Hospital.

A total of nine people were treated by Magen David Adom teams.

In addition, the building sustained damage.

Magen David Adom’s Negev Regional Director, Itsik Alfasi, said, “As soon as we heard the sirens, MDA teams were on full alert throughout the city, put on protective gear and got on the ambulances, the MDA 101 Emergency Dispatch Center received a report of direct hit on a house. Immediately First Responders on Medi-Cycles, ambulances and Mobile Intensive Care Units raced to the scene. When we arrived, we saw the damage and we checked to make sure there were no injured.”

Before the explosion, sirens were heard shortly after 3:30 a.m. local time in Be’er Sheva and the surrounding area.

The IDF confirmed that, in addition to the rocket that exploded in Be’er Sheva, a second missile fired at the same time landed in the sea.

Last Thursday, sirens were heard in and nearby the city of Netivot, as well as in several communities in the Gaza vicinity.

However, the IDF said that the sirens were not a result of a rocket attack but rather were sounded after the Iron Dome missile defense system was activated following a false alarm.

Tuesday night’s incident took place hours after Defense Minister Avigdor Liberman warnedthat Hamas would be dealt a harsh blow if the escalation in the region continues.

Speaking following a security assessment, Liberman said that Israel is “not prepared to accept the level of violence that we see week after week…We have exhausted all the options, all the possibilities, and now the time has come to make decisions.”

He then added, “We must strike Hamas hard, and this is the only way to bring the situation back to normal and lower the violence threshold to 0 or almost 0, or to the level of March 29.”