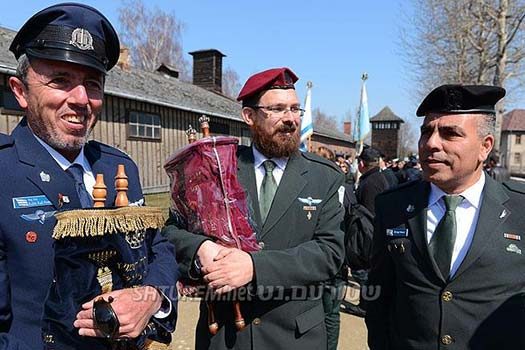 Maj. Rabbi Shraga Dahan, a military rabbi in the IDF, on Sunday revealed his unique way of confronting an extremist Haredi youth who verbally assaulted him over his military service for the Jewish state.

Dressed in uniform, Rabbi Dahan arrived at the Chabad synagogue in Beit Shemesh he regularly prays at, only to be confronted by an extremist Haredi youth praying at the synagogue who called him “hardak,” an insulting term used to stigmatize Haredi soldiers by questioning their religiosity.

But Rabbi Dahan did not take his brush with the so-called “hardak” campaign lightly, and responded in a unique way – that included seizing his hat and forcing him to learn about loving his fellow Jew.

“It’s not the first time this happened to me,” the military rabbi told Haredim 10 on Sunday. “About a year ago I walked around Ramat Beit Shemesh Bet and things were thrown at me, cups and things, I also took insults.”

Recalling Haredi soldiers who have been attacked by Haredi extremists, Rabbi Dahan said, “I started to fear going to those places, and that isn’t normal, I’m not ashamed of what I’m doing, do I need to apologize for representing Judaism in the IDF?”

Rabbi Dahan, who is a follower of the Chabad hassidic stream, felt that the verbal attack at his synagogue constituted a red line being crossed.

He approached the extremist youth who shouted the slur at him, and seized his hat.

“I didn’t want to hit him, I just wanted him to understand what he did,” recalled the rabbi.

He then forced the youth to sit in his place and recite Psalms for the merit of IDF soldiers.

After 40 minutes or so of reciting Psalms, Rabbi Dahan approached him and proposed that together in hevruta format they study chapter 32 from the Tanya, which deals with the commandment to love your fellow Jew.

The youth initially refused, but soon realized he had no choice, and he sat with the “hardak” rabbi.

After their joint study, Rabbi Dahan reveals the youth reached the conclusion that even if he thinks differently from the rabbi, that is no excuse to attack and hurt him.

“Let it be said in his praise that he understood his actions, and asked for forgiveness wholeheartedly,” said Rabbi Dahan. “I asked him if he is sorry for his actions, and takes on himself not to act in this way in the future, and he answered in the affirmative.”

When asked if his response of teaching the extremists Tanya might be a way to combat the campaign, he said, “it’s true, that’s the reason I have no opposition to you publishing the story.”

“If I succeeded in causing a little bit of love of Israel in these days of the counting (of the omer), let that be my reward,” he said.