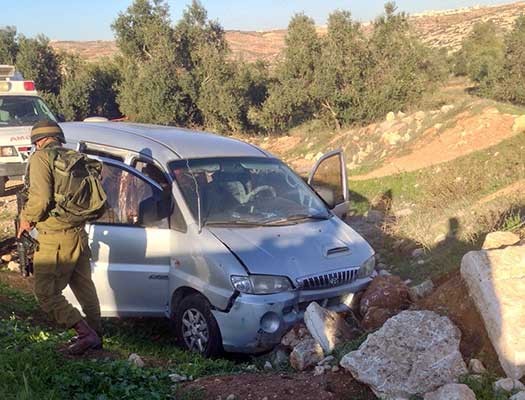 A 50-year-old man and his 18-year-old son were murdered in a terror attack when Arab terrorists opened fire on their vehicle near Mount Chevron in Israel. The victims were on their way to spend Shabbos in Chevron to celebrate the Shabbos Kallah of their daughter.

The attack occurred shortly before Shabbos outside the village of Otniel, which is south of Mount Chevron. The victims were identified as a 50-year-old man, and his 18-year-old HYD.

The family was on their way to Chevron where they were going to celebrate the Shabbos Chosson and Kallah for their daughter who is getting married on Tuesday.

They were traveling together in a van when terrorists fired a barrage of bullets at their vehicle. According to an initial report, a Palestinian terrorist exited his vehicle and fired on the Israeli car, then fled the scene. IDF troops were searching the area for the suspect, the army said.

The attackers fled and police have been searching the area. Police focused searches and checkpoints in the area of the Palestinian towns of as-Samu, Yatta and ad-Dhahiriya.

Noam Bar, A senior MDA medic described the tragic scene, “When we arrived we saw seven people outside the car; two of them – a man around 40 years old and a young man aged 18 lying [on the ground and] unresponsive with gunshot wounds to their upper bodies. They had no signs of life and we declared their death at the scene.

“We also provided first aid treatment and evacuated to hospital a 16-year-old boy, with gunshot wounds to his limbs, and four trauma victims.”