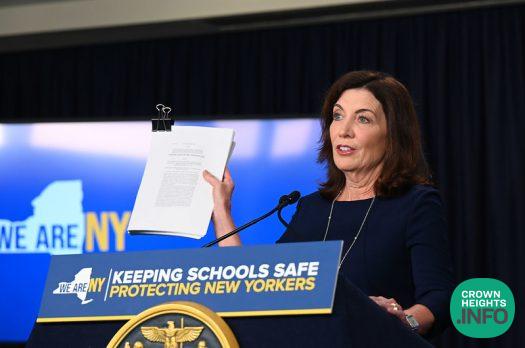 “I am proud of the work we have done to pass a nation-leading bill package to crack down on the scourge of gun violence, but this is an ongoing fight and we cannot stop there,” Governor Hochul said. “We will continue to take aggressive action until every child in New York is safe to pursue an education without the fear of senseless tragedy. That’s why I am proud to put pen to paper on Alyssa’s Law, a real and meaningful piece of legislation that will require school districts to evaluate systems that can save precious minutes – and lives – in the event of an active shooter situation.”

“Ensuring that our students make it home safe from school at the end of every day is one of our greatest responsibilities as a community,” Lieutenant Governor Delgado said. “By signing Alyssa’s Law, Governor Hochul is providing school districts with an added measure for keeping kids safe and deterring mass shootings in our schools. Having this safety measure in place will help ease parents’ fears when they send their kids off to school every day.”

In February 2019, Alyssa Alhadeff was killed in a mass shooting at the Marjorie Stoneman Douglass High School in Parkland, Florida. Her mother and father, Lori and Ilan Alhadeff, have established a foundation in her memory, and have advocated for the adoption of silent panic alarm systems in school buildings. The implementation of an alert directly to all law enforcement in the area of a school can save precious minutes in an active shooter situation and allow for immediate police response.

This bill requires that schools consider their usefulness when developing their district-level school safety plans, and expressly authorize their inclusion within building level safety plans. The panic alarm systems themselves can cost just a few thousand dollars to purchase, and can be implemented in the classroom as a smartphone app.

Following the tragedy in Uvalde, Texas, and so many before it, this bill is important step in making New York schools safer. This measure will help to ensure that, in the horrific event of violence in a school, law enforcement can respond as quickly as possible, and there is no delay in all available law enforcement personnel responding. Minutes saved in response time could save lives.

During Thursday’s bill signing event, Governor Hochul also outlined plans to launch a robust and multifaceted public education campaign surrounding New York State’s newly expanded Red Flag Law – with a specific focus on educators and mental health professionals. This summer, the state will partner in providing a series of in-person and virtual trainings for school boards, superintendents, teachers, school related professionals, principals, and parent-teacher associations. These trainings will clearly indicate how and when to complete the necessary paperwork to file an Extreme Risk Protection Order (ERPO) as well as address questions.

Additionally, state leaders will convene a series of roundtables specifically for local and county law enforcement, where they will detail new policies and procedures required under the law and best practices for implementation. These roundtables will be led by State Police and the Municipal Police Training Council, which is housed within the Division of Criminal Justice Services. Trainings will also be developed for emergency call center professionals.

The State is also creating a comprehensive suite of digital and physical educational materials to be unveiled in the upcoming weeks and months. They include an overhauled Red Flag Law website with key information for educators and mental health professionals, public service announcements and social media content.

On May 18, 2022, Governor Hochul signed an Executive Order that requires State Police to file for an ERPO whenever they have probable cause to believe that an individual is a threat to themselves or others.

On June 6, 2022, Governor Hochul signed a landmark legislative package to strengthen gun laws, including a substantial expansion to the Red Flag Flaw. Legislation S.9113-A/A.10502 expands who may file an Extreme Risk Protection Order (ERPO) petition to include health care practitioners who have examined an individual within the last six months. It amends the firearm licensing statute to ensure that mental health practitioners’ reports on potentially harmful individuals are considered closely when determining whether to issue a firearm license.

It also requires police and district attorneys to file ERPO petitions when they have acquired credible information that an individual is likely to engage in conduct that would result in serious harm—either to themselves or others. It requires State Police and the Municipal Police Training Council to create and disseminate policies and procedures to identify when an ERPO petition may be warranted.