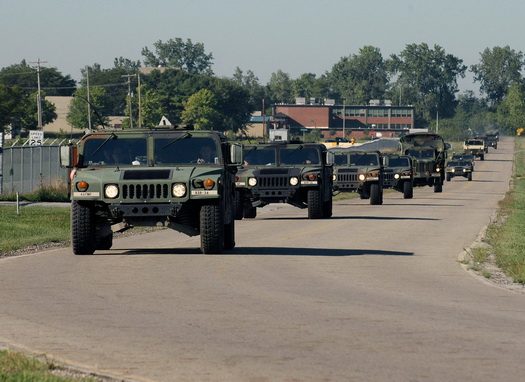 Governor Andrew M. Cuomo today announced that 540 New York Army National Guard Soldiers who have been on duty providing security for the Capitol complex in Washington D.C. will return to armories across New York on Saturday.

“On January 6 in Washington, D.C., our federal government faced a host of challenges unlike anything in recent memory, and it was profoundly important for New York to send members of our National Guard to facilitate the peaceful transition of presidential power and protect our nation’s greatest democratic assets,” Governor Cuomo said. “The members of our National Guard once again met the challenges with professional resolve, and we owe them a debt of gratitude for this service and for all of the work they’ve done during the last year in helping New York battle COVID-19 response.”

On January 26, at the request of the Secretary of the Army and the Chief of the National Guard Bureau, the Governor deployed 542 troops to be part of a force of 5,000 troops deployed to Washington, D.C. This was on top of a previous deployment of 1,300 New York National Guard Soldiers and Airmen that came in the wake of the assault on the United States Capitol on January 6. They remained on duty through the end of January, securing the inauguration of President Joseph Biden. The New York National Guard Soldiers, who came from across the state, secured the grounds around the Dirksen, Russell and Hart Senate Office Buildings and the Upper and Lower Senate Park. The New York Soldiers also helped secure the U.S. Capitol Police Headquarters.

The New York National Guard members worked alongside Guardsmen from New Jersey, Pennsylvania, Michigan, Georgia, the Virgin Islands and Delaware, as well as the Capitol Police, to accomplish their missions.

Major General Ray Shields, the Adjutant General of New York, said, “Our Soldiers responded in their usual unselfish way. They left their families and jobs behind and in the greatest traditions of the Citizen Soldier, they left home to defend our nation. I am so proud of each and every one of them. They acted with great professionalism and pride just like the 3,000 Soldiers and Airmen here at home supporting New York’s response to the pandemic.”

Since March 10 of 2020, 6,116 members of the New York National Guard have worked as part of the state’s response to the COVID-19 pandemic. Guard members have assembled 8.2 million coronavirus test kits, screened 2.5 million passengers arriving in New York by plane, assisted in 1.4 million coronavirus tests, and supported vaccination efforts for more than 1 million New Yorkers.