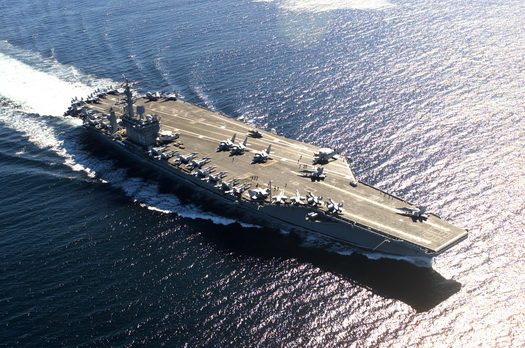 Iran sought a propaganda victory by constructing by attacking a fake American aircraft carrier during war games, but instead has harmed its own navy’s ability to function.

The fake aircraft carrier, which was actually a barge mocked up to look like an US navy vessel, was accidentally sunk, according to images shared by Aurora Intel and taken by the PLEIADES satellites.

“The stricken carrier can be seen, capsized, in commercial satellite imagery,” Forbes reported. “It began to sink when it was being towed back to Bandar Abbas after being attacked.” The vessel began to list “steeply to one side” on July 31, with “half of the flight deck submerged,” and has reportedly sunk even further since then.

According to the report by naval expert H I Sutton, the location where the fake carrier sunk could create a “serious headache” for the Iranian navy.

The vessel is currently just outside the Bandar Abbas harbor entrance and has sunk in shallow water which is only 45 feet deep, making it dangerous for other vessels to attempt to sail over it.

According to Sutton, the sunken vessel could cause “catastrophic damage” to vessels which sail over it and represents “a serious shipping hazard.”

Bandar Abbas is the location of Iran’s main naval base.

According to Sutton, Iran will have no choice but to attempt to salvage the vessel from the sea. However, he cast doubt on Iran’s ability to do so, noting that such an operation would be costly and the vessel currently appears to be abandoned.