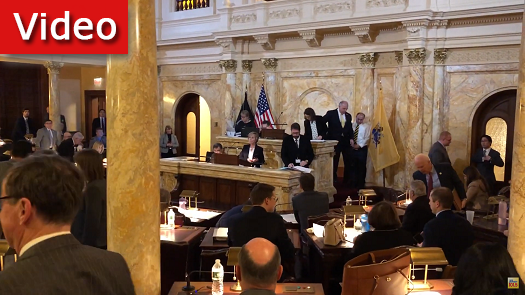 Thousands descended on Trenton, New Jersey Monday in response to New Jersey Senate President Stephen Sweeney’s (D-Gloucester) vow to pass S2173 that would have ended New Jersey parents’ ability to avoid vaccinating their children based on religious beliefs. Failure to pass the bill means lawmakers must start over in the next legislative session that begins Tuesday.

Months of organizing a national movement culminated in protesters flooding the chamber and cheering when the Senate session ended without a vote.

The legislation as initially written would have ended a religious exemption to vaccine requirements for children attending any school in the state, but lawmakers amended the bill last week to allow exemptions for pupils at private schools and for siblings of children who had vaccine-related injuries.

Sweeney said the lawmakers would reintroduce the bill Tuesday and restart the entire process, threatening “We’re ready to go to war with this.”

In years past, most states, including New York and New Jersey, granted parents the legal right to opt out of mandatory vaccination for their school aged children by submitting a religious exemption letter to their schools. Jewish schools accepted these letters in lieu of immunization records. This satisfied government agencies, such as local health and education departments, and the small minority of unvaccinated students remained unobtrusive.

Many Jewish communities have been terribly challenged by the issue of vaccination. The vaccination controversy entered the Jewish public’s notice in the fall of 2018 when the measles hit Monsey, Brooklyn, Lakewood, Passaic, and other Orthodox population centers. Legislation in New York State removed parents’ right to claim a religious exemption. New York schools were forced to identify and expel unvaccinated students. Many New Jersey schools began to do so voluntarily.

However, Orthodox Jewish voices were prominent at New Jersey’s protest, with bill opponents arriving by bus from Brooklyn, Monsey, Lakewood, Pennsylvania, and Maryland, reporting that gentiles repeatedly thanked them for their solidarity, happy to see Jewish opposition to repealing the religious exemption, explaining that they had previously not heard outcry from Jewish communities.