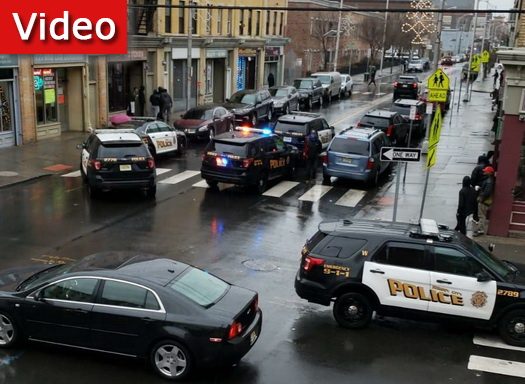 An active shooter situation is unfolding in a Jewish area of Jersey City.

Two men dressed in black arrived in a Uhaul Truck, and entered a kosher supermarket. A police officer was shot as the police began engaging the gunman.

Reports indicate that another person was shot as well, and was transported by EMS. Rumors that the person was Jewish is unconfirmed.

Update: Two gunmen are firing upon police and people from a building on Martin Luther King Drive near Bidwell Avenue, injuring at least one police officer Tuesday afternoon.

Update: One police officer heard in a radio transmission said that every time a police officer moves toward the shooter, gunfire comes from a window at them.

Update: Martin Luther King Drive has been cleared of people.

Update: The storefront has been identified by police as 223 MLK Drive, which police described as a bodega.

Update: Police reported that a person appeared to be shot inside the store, near the front entrance.

Update 2:06pm: Possibly as many as 4 additional hostages in the store.

Update 2:14pm: As per unconfirmed report, Chaim ben Leah was shot at his arms and is in a stable condition in NJ Medical Center.

Update 2:17pm: NYPD ESU On the Way as mutual aid with armored vehicles.

Update 2:28pm: Children still in elementary school across the street from store where shooters are, can’t evacuate school yet because too dangerous to do so.

Update 5:35pm: Volunteers from Misaskim, along with founder of Misaskim Rabbi Jack Meyer are on the scene working with local and Federal authorities to ensure proper Kavod HaNiftar.