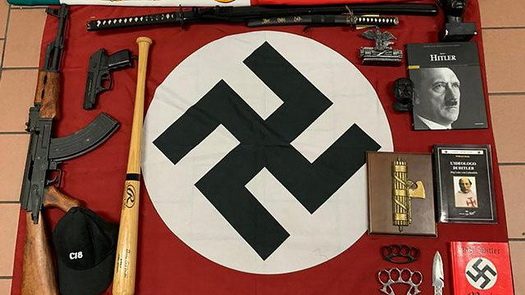 Italian police said Thursday they have uncovered a plot to form a new Nazi party and seized weapons including rifles and swords in searches across the country, the BBC reports.

Officers raided the homes of 19 suspects. They also found Nazi flags and books on Hitler and Italian fascist leader Benito Mussolini, according to the report.

The target was the self-styled Italian National Socialist Workers’ Party. The number of arrests made is not clear.

Operation Black Shadows by anti-terrorism and anti-mafia police was carried out across the country, from Milan to Sicily, after two years of investigations.

The self-styled party aimed to form a pan-European alliance with other xenophobic and anti-Semitic groups, police said, without revealing how many people had joined it, according to the BBC.

One suspect allegedly had links with the ‘Ndrangheta criminal network while another, a 50-year-old woman, called herself Hitler’s sergeant-major.

Anti-Semitic attacks and neo-Nazi activity have been rising in Italy.

Recently Liliana Segre, an 89-year-old senator who survived the Holocaust, was given police protection after receiving up to 200 hate messages a day.

In April, a Jewish high school student was attacked in an anti-Semitic incident in northern Italy.

“When we grow up, we will restart Auschwitz and all of you will burn in ovens, you Jews,” the attackers, who were also students, shouted at the victim.

The country’s Observatory on Anti-Semitism reported 190 anti-Semitic attacks in the first nine months of the year – more than double those in 2017, according to the BBC.

Anti-Semitism is not just prevalent in Italy. A global survey on anti-Semitism commissioned by the Anti-Defamation League (ADL) and released last week found that about one in four Europeans harbor pernicious and pervasive attitudes toward Jews.