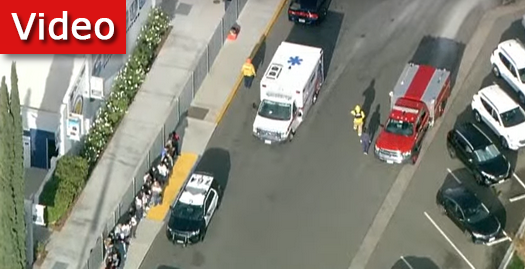 At least six people were wounded in a school shooting in Los Angeles County Thursday.

The incident occurred at Saugus High School in Santa Clarita, 30 miles north of the city of Los Angeles.

Two of the victims are said to be in critical condition, officials at Henry Mayo Hospital said.

Police have placed the school on lockdown, and are searching for the gunman.

Witnesses say the gunman was a 15-year-old student.

Nearby elementary schools have also been placed on lockdown following the shooting. Area residents have been advised to remain indoors and to keep their doors locked.

“If you live in neighborhoods anywhere near Saugus High, PLEASE LOCK DOORS and stay inside. If you see suspect, male dark clothing, in backyards, etc. CALL 911,” the sheriff’s office tweeted.

“This is an active shooter situation. The suspect described to be a male Asian, black clothing is outstanding.”

“We believe at this time that there is only one suspect but we are actively investigating and following all leads.”