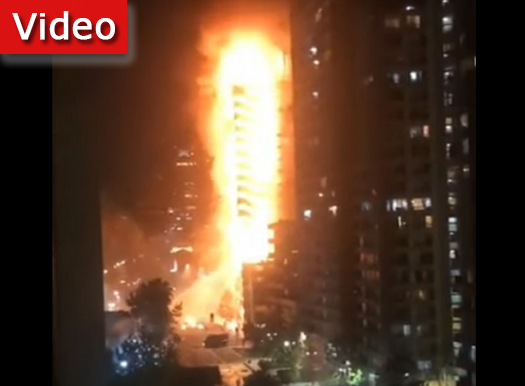 A state of emergency was declared on Saturday in Santiago, Chile, due to unrest caused by violent protests over a public transportation fare hike. Troops were seen patrolling the streets of Santiago on Saturday morning

The protesters, who were mostly high school and university students, violently attacked subway stations on Friday afternoon. Thousands of commuters were stranded as the protesters wreaked damage on the stations, barricading station entrances, smashing glass, throwing large objects on the subway tracks and lighting fires.

Police in riot gear responded with tear gas and batons, beating students and dragging them away but were violently resisted and were forced to withdraw from some stations. The protesters moved the riots to the streets, throwing stones at police, smashing cars, lighting fires and looting stores and kiosks. Military vehicles tried to restore order by pushing back protesters with water cannons.

Protestors firebombed a high-rise building of an energy company about 10 p.m. on Friday night, targeting the emergency stairwell. The company reported later that all workers were safely evacuated.

Chilean President Sebastian Pinera declared a state of emergency in Santiago at midnight in a press conference, transferring control of the city to the military and appointing Maj. Gen. Javier Iturriaga del Campo as Head of National Defense.

“The objective of this state of emergency is very simple, but very deep,” Pinera said. “Guarantee the rights of each and every one of our countrymen who have been seriously violated by the action of true criminals, who do not respect anything or anyone.”

Pinera said that protesters who attacked the city’s subway system will be prosecuted under the State Security Law, which according to the Associated Press, carries prison sentences of three to five years. However, Pinera added that he sympathizes with the plight of commuters adversely affected by the fare hike.

“For that reason, in the coming days, our government is going to summon a transversal dialogue, and we will use all efforts within our reach to be able to mitigate and alleviate the situation of our compatriots.”

The fare hike, which went into effect on October 6, caused widespread discontent due to the rising cost of living in other areas as well, including rent, food and gas, without a corresponding rise in salaries.

“To be honest, I think there’s a big feeling of injustice that goes beyond the thing about the metro and buses,” Cristián Castro, Director of History Department at Universidad Diego Portales, said. “The cost of living in Chile has no logic when related to the paychecks you receive at the end of the month, unless you’re part of the upper class. The system has favored too few for too long.”