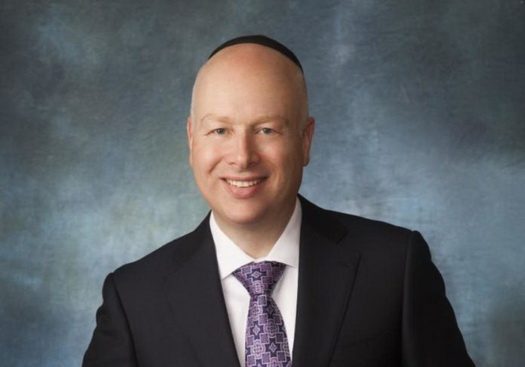 Greenblatt was one of the key architects of the Trump Administration’s long-waited peace plan, which has been dubbed the “Deal of the Century.”

He will remain in his position for several weeks until the Administration reveals the details of the peace plan, which is expected to be shortly after Israel’s elections on September 17.

In its announcement, the White House stated that Greenblatt had originally intended to serve as special envoy for two years, but stayed on longer as the roll-out of the peace plan was continuously delayed.

Greenblatt said Thursday that he was “incredibly grateful to have been part of a team that drafted a vision for peace. This vision has the potential to vastly improve the lives of millions of Israelis, Palestinians and others in the region.”

He further stated that he is looking forward to returning to New Jersey with his family.

Israeli Prime Minister Binyamin Netanyahu said in response to Greenblatt’s resignation: “I wish to thank Jason Greenblatt for his work for peace and security and for speaking the truth about Israel in front of all those who bash it.”

US President Donald Trump thanked Greenblatt for his service.

‎”After almost 3 years in my Administration, Jason Greenblatt will be leaving to pursue work in the private sector. Jason has been a loyal and great friend and fantastic lawyer,” Trump said.

“His dedication to Israel and to seeking peace between Israel and the Palestinians won’t be forgotten. He will be missed. Thank you Jason!”

President Trump’s son-in-law Jared Kushner, his aide Avi Berkowitz and US Ambassador to Israel David Friedman will continue to work on the US peace plan. Berkowitz will take on a larger role in Greenblatt’s absence.