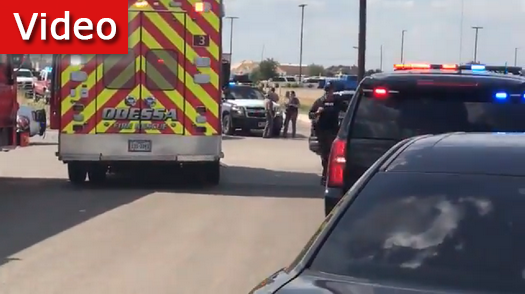 A shooting incident has occured in Odessa, Texas. Five people were killed and the Midland Police Department has informed the public that the suspect shooter has been shot and killed.

As the event was developing the Odessa Police Department posted the following notice on Facebook: “A subject (possibly 2) is currently driving around Odessa shooting at random people. At this time there are multiple gunshot victims. The suspect just hijacked a U.S. mail carrier truck and was last seen in the area of 38th and Walnut. Everyone is encouraged to get off the road and use extreme caution! All law enforcement is currently searching for the suspect and more information will be released as soon as it becomes available”.

“We believe there are two shooters in two separate vehicles”, the Midland Police Department updated earlier, “One suspect is believed to be at the Cinergy in Midland and the other is believed to be driving on Loop 250 in Midland. The two vehicles in question are: gold/white small Toyota truck and a USPS Postal Van. Please stay away from these areas and stay indoors”. The two-shooter option was later dismissed.

“There are reports of an active shooter at the Home Depot in Odessa”, Midland Police initially wrote on the police Facebook page, “For the safety of the public and law enforcement please stay away from the area and stay in your homes. We will update with more information as soon as possible”.

The local Department of Public Safety had reported that the shooter was in a car armed with a rifle and headed from Odessa to Midland.

ABC’s Channel 12 News reported that the University of Texas of the Permian Basin issued the following message: “Lock Down Lock down in place. Officers are looking for suspect in shooting in the are of UTPB Campus. LOCK DOWN NOW”