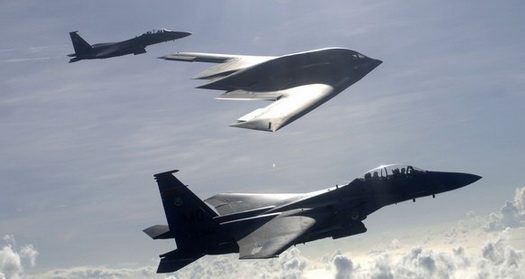 The New York Times reported on Thursday night that President Donald Trump approved military strikes against Iran in retaliation for downing an American surveillance drone, but pulled back from launching them.

According to the report, as late as 7:00 p.m. Thursday, military and diplomatic officials were expecting a strike, after intense discussions and debate at the White House among the president’s top national security officials and congressional leaders.

Officials said the president had initially approved attacks on a handful of Iranian targets, like radar and missile batteries.

The operation was underway in its early stages when it was called off, a senior administration official said. It was not clear whether Trump simply changed his mind on the strikes or whether the administration altered course because of logistics or strategy.

Asked about the plans for a strike and the decision to hold back, the White House declined to comment, as did Pentagon officials.

Meanwhile on Thursday, the US Federal Aviation Administration (FAA) on Thursday issued an emergency order prohibiting US operators from flying in an overwater area of Tehran-controlled airspace over the Strait of Hormuz and Gulf of Oman due to heightened tensions, Reuters reported.

In a separate advisory to operators, FAA said according to flight tracking applications, the nearest civil aircraft was operating within around 45 nautical miles of a US Global Hawk drone when it was shot down by an Iranian surface-to-air missile this week.

“There were numerous civil aviation aircraft operating in the area at the time of the intercept,” FAA said.

The agency said it remained concerned about the escalation of tension and military activity within close proximity to high volume civil aircraft routes as well as Iran’s willingness to use long-range missiles in international airspace with little or no warning.

Earlier on Thursday night, United Airlines announced that it had suspended flights from Newark to Mumbai after a safety review in light of events in Iran.

“Given current events in Iran, we have conducted a thorough safety and security review of our India service through Iranian airspace and decided to suspend our service between EWR and BOM,” the airline said on its website.

The latest developments follow Iran’s downing of the US drone. US officials have denied that the drone had entered Iranian airspace and stated that the drone was shot down in international airspace over the Strait of Hormuz.

On Thursday, the Pentagon released an image showing the flight path for the drone that was shot down, in an effort to prove that the it had been shot down in international airspace.

“This was an unprovoked attack on a US surveillance asset that had not violated Iranian airspace at any time,” said Lt. Gen. Joseph Guastella, the commanding general of United States Air Forces Central Command.

Earlier, Iran filed a complaint against the US, claiming the drone was on a spy mission over its territory and was shot down in Iranian airspace.

In a letter to the UN Secretary General and the Security Council, Iran’s UN Ambassador Majid Takht Ravanchi said a US drone entered Iranian airspace despite repeated radio warnings.

The drone, claimed the Iranian Ambassador, conducted “an overflight through the Strait of Hormuz to Chabahar port in a full stealth mode as it had turned off its identification equipment and engaged in a clear spying operation.”