« Video of the Day
A Sefer Torah for Alan Dershowitz » 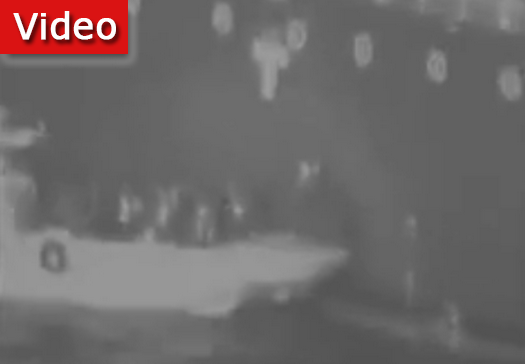 In the hours before the attack on two tankers in the Gulf of Oman on Thursday, the Iranians spotted a US drone flying overhead and launched a surface-to-air missile at the unmanned aircraft, a US official told CNN on Friday.

The missile missed the drone and fell into the water, the official said.

Prior to taking fire, the American MQ-9 drone observed Iranian vessels closing in on the tankers, the official added, though the source did not say whether the unmanned aircraft saw the boats conducting an actual attack.

This is the first claim that the US has information of Iranian movements prior to the attack.

The same official also said in the days prior to the attack, a US reaper drone was shot down in the Red Sea by what is believed to be an Iranian missile fired by Yemeni Houthi rebels.

Thursday’s attack follows attacks on four tankers off the coast of the United Arab Emirates on May 12. Two of the ships targeted in that attack were Saudi oil tankers that were en route to the United States.

US Secretary of State Mike Pompeo accused Iran of being behind the attacks in the Gulf of Oman.

“It is the assessment of the United States that the Islamic Republic of Iran is responsible for the attacks,” Pompeo told reporters, adding, “This is based on intelligence, the weapons used, the level of expertise needed to execute the operation, recent similar Iranian attacks on shipping, and the fact that no proxy group operating in the area has the resources and proficiency to act with such a high degree of sophistication.”

The US Central Command later released footage that purports to show the crew of an Iranian patrol boat removing an object from the hull of the Japanese tanker.

Iran categorically denied being behind the attack.

The Pentagon had tough words for Iran on Friday as the US continues to assert its claim that Tehran was responsible for the attack on the two oil tankers in international waters.

“We’re making sure that General McKenzie and the central command has the resources and the support that they need to conduct their missions,” acting Defense Secretary Patrick Shanahan said, according to CNN, adding that the US continues to work on building an international consensus that Iran was behind the attack.

The United Kingdom released a statement Friday saying it is “almost certain” that a branch of the Iranian military — the Islamic Revolutionary Guard Corps (IRGC) — attacked two tankers.

No other state or non-state actor “could plausibly have been responsible,” the British statement added.

The two attacks followed repeated threats by Iran to close the strategic Strait of Hormuz, which is located at the mouth of the Persian Gulf and through which about a third of all oil traded at sea passes.

In the last few years there have been several close encounters between Iranian and American vessels in the area.

Iran does not appear to be backing off and continues to engage in provocative behavior, a US official told CNN on Friday, adding that Iranian small boats are preventing tug boats from towing away one of the damaged tankers from Thursday’s attack.

« Video of the Day
A Sefer Torah for Alan Dershowitz »