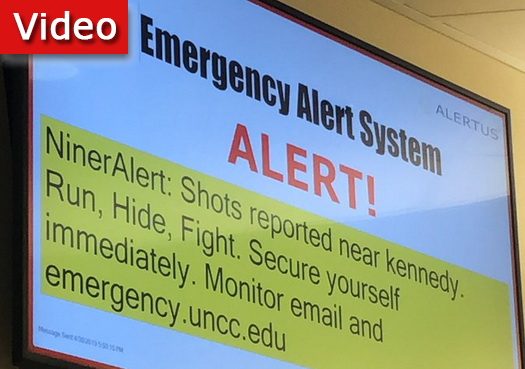 Two people were killed and four were wounded on Tuesday in a shooting on the campus of the University of North Carolina at Charlotte, CNN reported, citing the Mecklenburg Emergency Medical Service Agency.

Many students were on campus at the time of the shooting due to a concert at the school.

A suspect has been identified as Trystan Terrell, a student at the university. A city official announced that he has been taken into custody.

The motives behind the shooting remain unclear.

Law enforcement officers were sweeping the affected buildings, the university tweeted out, while the campus buildings remain on lockdown.

“Campus lockdown continues. Remain in a safe location. Monitor email and UNCC homepage,” tweeted the university, which has 30,000 students.

Students being led by an officer down sidewalk of UNCC campus. @WBTV_News pic.twitter.com/BIx9LOqIv3

Prayers for the police running IN to an active shooter situation at UNCC. Video sent to me by a student who is confirmed safe. @wcnc pic.twitter.com/3xdhI0KaMB