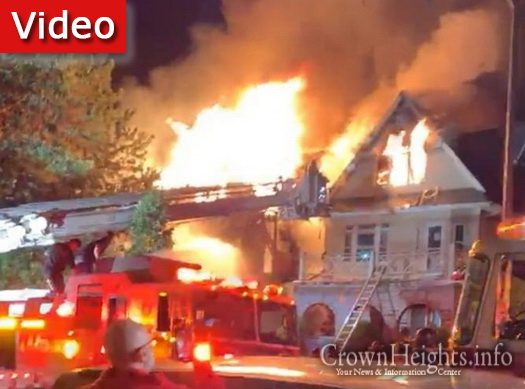 Chief of Fire Operations Thomas Richardson says firefighters were on the scene at 1488 East 17 Street near Avenue N within 5 minutes, and found three homes on fire at 4:05AM.

Flatbush Hatzolah received multiple calls, and along with FDNY EMS treated and transported approximately 10 victims. Most of them suffered smoke inhalation, and are all in stable condition including an infant.

Highly credible sources confirm to YWN that Fire Marshall’s are in possession of a security camera footage of an individual seen running from the fire just as the fire started – in the home of a long-time Rebbi at Yeshiva Chaim Berlin.

There is additional footage showing the home literally bursting into flames – pointing to the fact that an accelerant was used.

Additionally, YWN is aware that authorities are investigating recent threats that were made to the home owner.

Thankfully, all homes had working smoke detectors, and no one was seriously injured of killed.

UPDATE: The FDNY has confirmed the source of the blaze as arson.