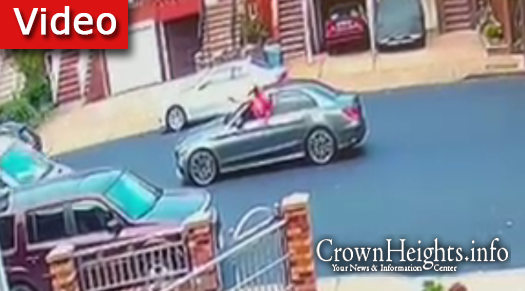 In a story broken Motzei Shabbos on CrownHeights.info, a Crown Heights family miraculously missed a tragedy after their car was hit in errant gunfire from a shooting on Remsen Ave.

New footage has emerged from the shootout, shedding new light on what now appears to have been a two way shootout between vehicles.

As previously reported, the Jewish family, who lives nearby, had been driving their family minivan northbound on Remsen Ave around 5:00pm Friday afternoon when four gunshots rang out directly behind them.

original video from the shooting shows as the minivan immediately swerves into a homes parking spot as what appears to be a blue SUV slows down behind them.

The new video, which shows a new angle of the incident, gives a clear view of the second vehicle involved in the shooting, what appears to be a silver/blue BMW. The blue SUV can clearly be seen speeding past the BMW as the driver of the BMW appears to return fire from through the drivers side window.