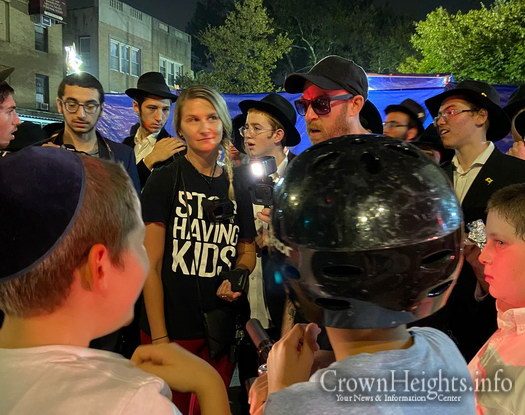 As Kaporos on Kingston Ave got underway Tuesday, the annual protesters made themselves known, this year by targeting the children.

Witnesses on Kingston Ave and President Street were shocked to see as the protesters, wearing black tee shorts with the words “Stop Having Kids”, began speaking to children, videoing them and telling them that what their parents are telling them is wrong, and they should not listen to them.

While Kaporos protesters are hardly new, and their extreme actions have earned them multiple headlines, the targeting of the children with attempts to turn them against their parents is an unhappy development.

Twitter personality @Mottel highlighted their rhetoric in one line, “Guy with the camera to the kids: “You have terrible parents.”

As no crime has actually been committed, the NYPD is unable to intervene.

Guy with the camera to the kids:
“You have terrible parents.”