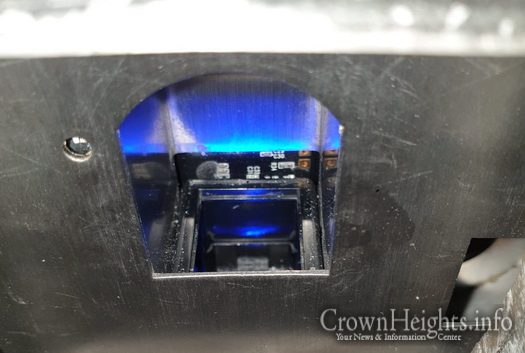 A pair of masked teenagers, furious at the yeshivas insistence that only those enrolled be allowed to eat in the 1414 President Street dormitory, decided to vandalize the yeshiva’s newly installed turnstile, on Shabbos.

According to a source familiar with the incident, two Lubavitch teenagers entered the basement of 1414 President Street at approximately 3:30am Friday night, wearing black masks to obscure their faces.

The two went on to be violate the sanctity of the shabbos by using tools to damage the finger print readers of the lunchroom turnstiles installed to only allow those enrolled in the yeshiva to have access to the lunchroom, effectively destroying them.

This group had also made previous attempts to damage the turnstile by calling 911 and telling them that there was a person trapped inside the lunchroom. According to someone who was there at the time, the firefighters who responded learned of the teenagers intent, and declined to break the turnstile.

CrownHeights.info was told that the yeshiva was given permission by rabbonim to call the police, who are presently investigating.

Many believe that the yeshiva is now reaping the reward of ignoring such similar attacks that have been occurring in 770 by former students and their teenage proxies for years, with recent attacks on the administrators of 770 and vandalism of the building.

These young men have been living illegally for years in the yeshiva’s 749 Eastern Parkway dormitory, many working jobs or staying past their visas despite having completed their year in Kvutza.

Until recently, the yeshiva had turned a blind eye to these former students, instead averting blame to the administrators of 770 or claiming lack of rabbinical intervention. The yeshiva’s stance only changed once this same group turned on the yeshiva following the yeshiva’s closure a year ago due to the COVID-19 pandemic.

At the time, the group began staging demonstrations outside the home of Rabbi Gluckowsky, the yeshiva’s lead administrator, and using attrition style tactics to force the yeshiva to continue feeding them.

At the time, an estimated 100 people not enrolled in the yeshiva were eating daily meals in the yeshiva dormitory, leaving many legitimately enrolled bochurim without food and costing the yeshiva hundreds of thousands of dollars a year.

Another attack was perpetrated recently on Rabbi Chaim Boruch Halberstam, who takes care of upstairs 770, with the entire incident recorded on video.

Despite this, along with many other recorded vandalisms of 770, these bochurim continue to have a near blanket immunity, seemingly including one from the NYPD’s 71st Precinct which has jurisdiction over much of Crown Heights, including 770.