« LIVE at 9:00PM: The Fifth Yartzeit of Rabbi Yehoshua B. Gordon
Camp Grow Announces Head Staff For The Summer of 2021 » 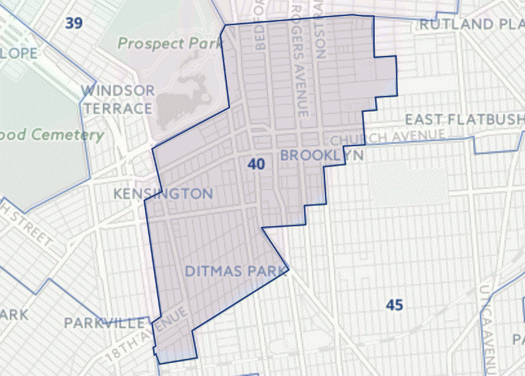 The deadline for signing up for the Democratic primaries is just days away, and Crown Heights’s impact might very well be able to decide who will be running for the 40th District seat for New York City Council under the Democratic Party.

“The June Election is pivotal and will tell us if there is a future for us in NYC,” Yosef Hershkop, a local healthcare administrator told CrownHeights.info. “1500 to 1800 votes can really make the difference in a local election.”

And for the 40th District, it’s not a tight race, it’s a VERY tight race, with as many as a few hundred votes able to create a decisive victory for any one candidate.

At present, Crown Heights is split into three districts, the 35th, 40th, and 41st, making a complete Crown Heights block vote impossible, but leaving the ability for the community to make a difference in all three.

The present City Council’s 40th District, which includes the area below Empire Blvd and west of Kingston Ave, is representated by Mathieu Eugene, a Haitian-born immigrant that has won four elections spanning from 2006 through 2017. Due to term limits, Eugene’s slot will be up for grabs this year, marking a new chance for a budding politician to begin their career.

Not to let the chance pass, the list of candidates quickly filled, with seven presently contending for the democratic candidacy.

Yet not a single one of them is expected to bring a landslide victory, with the past primary election only granting the incumbent Eugene just 41% of the vote, followed by Cunningham, who won 30%. With the low numbers of voters who turn out for the primaries, this is a matter of just a few hundred votes.

“We can split the vote and change the outcome,” Shaya Gordon, a local businessman said. “It’s important for people to see.”

The largest hurdle to pass is simply getting people to vote, an ongoing issue that has plagues US politics for years.

According to that estimate, only 1 in 5 Crown Heights’ers are registered to vote, and of those, between 20% to 40% are registered Republicans, leaving the community hopelessly divided and useless as a political leveraging tool.

Community activists have started a push to have the community sign up as democrats, allowing them to have a voice in the party’s candidate for the District seat. With the demographics of the city, a win for the Democratic candidate is almost a given.

“If we work together, we have the numbers to make a difference and elect people who are closer to our viewpoint,” the activists wrote to the community. “We must make sure that every person over 18 in our home is registered at his or her Crown Heights address. We need the numbers to overcome powerful forces that want to take this City to the extreme Left.”

With an estimated 2,500 Jewish Crown Heights residents living the in 40th District, a block vote can make the difference, and force the City Council Representative to pay close attention to Crown Heights or risk losing future elections.

The deadline to switch party status for registered voters is February 14th.

REGISTER TO VOTE BY MAY 15TH

« LIVE at 9:00PM: The Fifth Yartzeit of Rabbi Yehoshua B. Gordon
Camp Grow Announces Head Staff For The Summer of 2021 »