« TONIGHT: Never Before Seen Footage of the Rebbe During Live Farbrengen
Weekly Letter: The Function of Shechitah and its Chasidic Dimension » 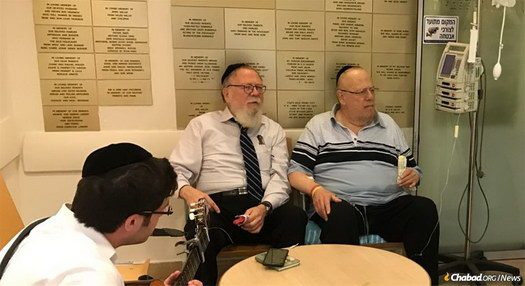 Never tiring, Avraham Lider, center, consistently came to the aid of Jewish community members before, during and after hospitalization. Here Lider and young volunteers visit patients at a New York City hospital.

Rabbi Avraham Lider, a tireless activist who dedicated his life to helping others with medical emergencies and other needs, passed away suddenly on Sept. 18, the first night of Rosh Hashanah, 5781, from a heart attack. He was 61 years old.

The rabbi was a beloved figure in the Crown Heights neighborhood of Brooklyn, N.Y., where he founded and headed the Ahavas Chesed organization for nearly 30 years. The list of services it offers is as vital as it is broad: helping patients at home, procuring medical supplies and equipment, a veritable army of volunteers on call for bedside visitations, hot meals for the sick and their families, as well as a special community ambulette to shuttle patients around for their health needs, to name just a few.

Perhaps one of the most visible projects Lider spearheaded were monthly blood drives. Corralling community members to report to a local consignment laboratory and donate blood to the New York Blood Center, over the years Lider single-handedly arranged thousands of donors. With his eyeglasses perched on top of his head and deep baritone voice, Lider was a constant presence at these drives, effusing joyous gratitude to the many who would pass through.

As the recent coronavirus pandemic wreaked its destructive path across the world and particularly so in the local community of Crown Heights, Lider’s Ahavas Chesed kicked into high gear, tending to the hundreds of patients in the neighborhood in so many different ways. When the FDA fast-tracked the approval of treatments using convalescent plasma for patients suffering from the virus, Lider, along with other activists from various Orthodox communities, arranged an unprecedented plasma drive that saw the New York Blood Center bring the sophisticated equipment to a remote location for the first time ever—right in the heart of Crown Heights—at the behest of Ahavas Chesed.

Those at the recent plasma drive were able to see the joy on Lider’s face as he proudly reported on the life-saving efforts he had helped organize in the preceding weeks.

Indeed, community members relate that when a healed COVID-19 patient would finally make his or her way home after battling the dreaded illness, Lider would personally escort them, jumping and dancing with joy as if it was his own child.

Native of Jerusalem, and a Born Teacher

Lider was born in 1959 to a family of Slonim Chassidim in Jerusalem. When Avraham was 12-years-old his father, Boruch Dovid, was rushed to the United States for emergency eye surgery, taking his son along to accompany him. Lider would later recall how impressed he was by the overt presence of Satmar Chassidim in the hospitals of New York City, always available to help patients with the many chesed organizations they run. It was then that he resolved to one day take up this important work himself.

After growing closer with Chabad-Lubavitch during his teenage years in Jerusalem, Lider enrolled in a Lubavitcher yeshivah, and eventually moved to Brooklyn to be in close proximity to the Rebbe—Rabbi Menachem M. Schneerson, of righteous memory. There, he met his wife, Tema (nee Levitin), and they settled in Crown Heights.

Lider first turned to another one of his natural gifts: education. A warm, caring man with boundless energy, he taught Pre-1A in the local boy’s school Oholei Torah for 20 years. Hundreds of students recall his energy, passion for Torah and the outpouring of love during his lessons.

He would say that teaching was the joy of his life, as he cherished his students and they cherished him.

The Chesed Project Gets Underway

But G‑d had other plans, and the nascent vision of the young boy from Jerusalem eventually blossomed. It all really started by chance, as Lider one day received a call from a friend whose wife was giving birth and needed help getting to the hospital. “Naturally, I obliged and drove them there,” he once told Chabad.org in an interview. “I left them there, pledging to return a bit later to see how they were faring. When I came back and checked in on them, the joy that I saw on the husband’s face was so gratifying. I could tell that my visit was so important to him.”

It was then that he realized that a vital community resource was needed in Crown Heights—with no one to fill it. Indeed, word got out that “Lider is willing to help,” and the calls steadily started coming in. Eventually, he was convinced that the time had come to fully invest himself in such activities.

“He was literally a walking piece of chesed,” says Bentzion Stock of Chevra Simchas Shabbos V’Yom Tov, a local organization that assists families in need with food and other basic services for Jewish holidays and beyond. In the context of his own community work, Stock worked together with Lider many times, connecting people to him and the endless resources he was able to provide. “He lived to help someone else 24/7, always ready to assist another with their medical—or any other—needs.”

Indeed, Lider was known to have an almost endless Rolodex of doctors, specialists and other medical professionals with whom he could instantly connect. It was something he was very particular about, drawing from the Rebbe’s instructions to countless people to always consult with what is called a rofeh yedid—a doctor who is not only a professional, but a friend. To this end, he would say that he could personally name more than 600 doctors that he considered personal friends.

Never tiring, he was always ready to call upon his contacts, eventually setting up official liaisons with nearly every New York City hospital, men and women who have consistently come to the aid of community members to help them navigate the intimidating and complex ecosystem of a city hospital.

A man whose phone knew no rest, Lider once said in an interview, “My problem is that I can’t say no.” Indeed, from funerals to visas for stranded Israeli students, to a soup kitchen for the needy, he did not know how to stop for even a moment.

But above all, his most fervent wish was—as he was wont to say—that no one ever need his services, save for one thing alone: to assist with the birth of healthy newborn babies.

« TONIGHT: Never Before Seen Footage of the Rebbe During Live Farbrengen
Weekly Letter: The Function of Shechitah and its Chasidic Dimension »