« Picture of the Day
Chabad Hosts Its First Shabbaton in Warsaw » 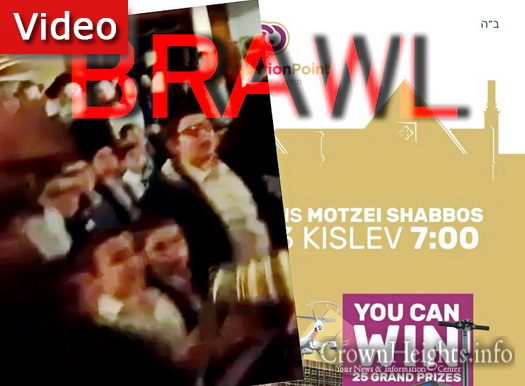 As a large group of Crown Heights children sat down in 770 for a last minute Connection Point Rally, a group opposed to the event also geared up to rally in protest of the video.

The Connection Point rally, done in conjunction with Tzivos Hashem, was to bring a children’s rally with the Rebbe to life where it originally took place. Instead, the group  took offense at the videos JEM logo, and decided it was grounds to disrupt the event by force.

Menachem Benchemon, a Crown Heights resident, was having none of it. As the group attempted to block the video from being projected to the screen, he intervened, sparking a brawl that was captured on video.

As fists flew and mace was sprayed, the children got ringside seats, to what was later described as a disgusting and disgraceful scene.

The police were called into 770 to intervene, and despite no arrests being made, the police took down reports on the incident. Both sides claimed the other as the instigator, with injuries on both sides and a phone allegedly stolen.

Gut Voch! I feel compelled to write this message to you due to the occurrence at the Connection Point – Real Rally program in 770 tonight.

The Connection Point program is a beautiful program where talmidim watch and understand a full rally of the Rebbe shown in Yeshiva in a few segments. Each time we complete a rally, we conclude with the Real Rally event where the talmidim come in their free time and experience a full rally with the Rebbe.

For the Real Rally program, all the local boys and girls schools join together for an even better experience. This past Lag Baomer and Chol Hamoed Sukkos we had the most beautiful Real Rally programs take place at 770.

Tonight, sadly, there was a group of bochurim that intended to disrupt the program. There were some very disrespectful scenes and unfortunately some of our talmidim witnessed screaming and fighting.

Your son may have come home confused and upset. I am so sorry that our talmidim were exposed to this.

As parents and Mechanchim, we must use each opportunity as a Chinuch moment.

We need to express to our children that we must stay far away from מחלוקת at any cost. We don’t need to koch in what happened.

To the credit of our talmidim, they remained focused and BH watched the rally. They deserve a compliment.

« Picture of the Day
Chabad Hosts Its First Shabbaton in Warsaw »