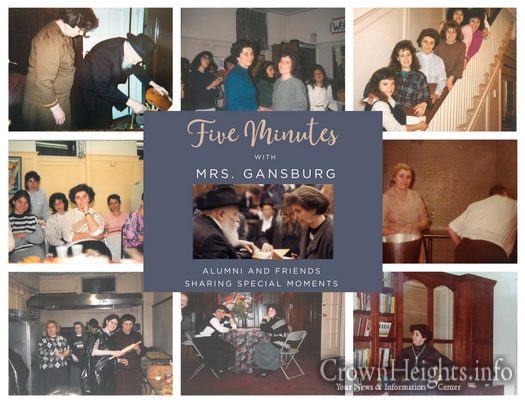 An evening marking the Fifth yartzeit of Mrs. Gitta Gansburg will take place this Wednesday, Vov Kislev/December 4. The event, beginning at 8 p.m. will be held at Mrs. Gansburg’s home for 38 years, the dormitory at 1367 President Street.

During one of the Rebbe’s visits to the dormitory on the first night of Pesach, the Rebbe told Mrs. Gansburg, “Thank you for raising my daughters.”

Mrs. Gansburg devoted nearly four decades of her life to “raising the Rebbe’s daughters.” In this capacity she worked together with her husband, famed chasid Rabbi Yitzchok (“Itchke”) Gansburg. Mrs. Gansburg is the daughter of the renown chasid Reb Refoel Nachman Kahn.

The event, “Five Minutes with Mrs. Gansburg” will feature 8 people who knew Mrs. Gansburg in different ways and at different times of her life. They will each share a teaching, memory or life-lesson from Mrs. Gansburg for five minutes. The featured speakers are Rabbi Shloma Majeski, dean of Machon L’Yahadus, Chaya (Arad) Schwartz who was a dorm counselor, Basya Gold, Esther Stein, Alizah Chana Schmalberg, Raiza Malka Hartz, and Nava Pais, all of whom were Mrs Gansburg’s “spiritual daughters,” and Mrs. Nechama Chanin – Mrs Gansburg’s eldest daughter. Rabbi Yitzhak Hecht, representing NCFJE, will also share.

This year’s Machon L’Yahadus students hail from all over the United States as well as from Canada, Israel, Australia, Brazil, Papua New Guinea, Panama, Dominican Republic, Mexico, Russia and Ukraine.

The event will be broadcast on FB live on the Machon L’Yahadus facebook page @womensyeshiva.