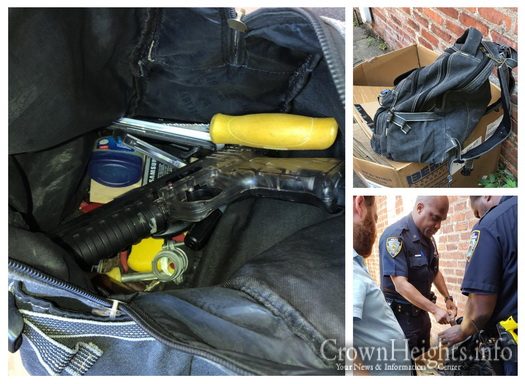 While on a call for a suspicious package, a bag found by an alert Shomrim volunteer in a Crown Heights alleyway turned up more than what was expected. The police were called, and a paintball gun was confiscated along with an assortment of tools.

“If you see something, say something,” its not just a slogan, its an action.

An alert Shomrim volunteer responding to a call for a suspicious package, found an abandoned backpack Monday morning, sitting in a Crown Heights alleyway.

The police were called, and when the backpack was opened, it was found to have an assortment of tools, along with a gun.

Upon inspection, the gun was found to be a paintball gun, which was confiscated by the police.

Brooklyn has recently seen a spike in hate crimes, prompting the governor of New York to send the State Police Hate Crimes Task Force down to investigate. Crown Heights has seen its own uptick, with two Jewish men assaulted on Friday while the assailant made anti-Semitic statements.

There is a never a routine call. While responding to a call for a suspicious bag our Vol secured it & alerted @NYPD71Pct which responded quickly and removed it #EyesAndEars #ItsWhatWeDo pic.twitter.com/XkX24RqvgZ